A poor young Scandinavian immigrant couple winds up in Canada in search of prosperity, but the hardship of the Great Depression takes a toll in a way they never feared when they went in search of the dream.

The young couple Tomas and Solveig Sorenson has left poor conditions in Scandinavia in search of the American dream. Winding up in the Canadian prairie, establishing their little family, but not much later they find the dream lost in the great depression. The farm they are renting is turning up no food or profit, and Solveig wants to go back home. But the ticket fairs are just as far away as their dream. Tomas goes to the city to find work, where no work is to be found. The distance between them has consequences that is going to take a toll on their relations and lives.

Based on a true story, this hard hitting Canadian depression tragedy is not for the faint hearted, or those in no need of heavy stuff. Well acted by Norwegian and Danish stars in the main roles; Line Verndal (as Solveig) and Nicolaj Lie Kaas (as Tomas), we’re following a tragedy which there where many of in the toll of the great depression. Filmed in bleak whitish colors expressing the time almost 100 years ago, as well as giving the right impression of depressing times, we see the dreams go down the drain one after another. Of course very realistically told, and with both lyrical and expressive amounts of feelings, we get the sense of reading a classic novel like Knut Hamnsun’s “Starvation”. Quite alike, though with a couple of decades earlier, we get the frustration down to the bone marrow of the suffering.

A strong story, which slowly but strongly are gripping you, sending the thoughts of the many ancestors of those who went in the search of the big dream. Today more than 30 million descendants of Scandinavian immigrants are living in Northern America. Now the poverty is great amongst large groups of the American population, whilst Scandinavia is on top of all statistics when it comes to wealth, democracy, transparency, dream realizing as well as securing equality and prosperity. In less than 100 years we’ve seen the table turn 180 degrees. In such perspective, this is food for thought. Dreams comes with a expiration date. 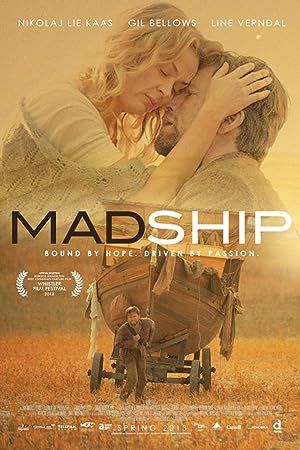 Be the first to review “Mad Ship 2013” Cancel reply