The Weiss family is the archetypical Hollywood dynasty: father Stafford is an analyst and coach, who has made a fortune with his self-help manuals; mother Cristina mostly looks after the career of their son Benjie, 13, a child star. One of Stafford’s clients, Havana, is an actress who dreams of shooting a remake of the movie that made her mother, Clarice, a star in the 60s. Clarice is dead now and visions of her come to haunt Havana at night… Adding to the toxic mix, Benjie has just come off a rehab program he joined when he was 9 and his sister, Agatha, has recently been released from a sanatorium where she was treated for criminal pyromania and befriended a limo driver Jerome who is also an aspiring actor.

(87%) A warped (or is it?) look into modern day wealthy Hollywood life that is filled with rotten to the core characters, and some really uncomfortable subject matters that mixes a perfect cocktail of both dark satire and horror. The film switches focus constantly throughout between the multiple leads, with Julianne Moore stealing the show with the finest performance I have ever seen of her as a morally backward ageing star with a heap of baggage and multiple mental health issues. While Mia Wasikowska plays one of the more memorable characters of the year. The film is quite script heavy and it really is something that requires the fullest attention to properly take in and appreciate everything it has to offer as the plot cleverly zig-zags between the interlocking characters both on and off screen. Old master Cronenberg really has created a jet black horror/comedy drama to be considered among the finest, even if it won’t be for everyone, but I thought it was pretty great. 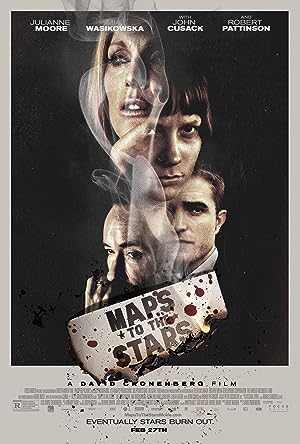 Maps to the Stars (2014)
111 min|Comedy, Drama|27 Feb 2015
6.2Rating: 6.2 / 10 from 34,905 users
A tour into the heart of a Hollywood family chasing celebrity, one another and the relentless ghosts of their pasts.
Director: David Cronenberg
Creator: Bruce Wagner (screenplay)
Actors: Julianne Moore, Mia Wasikowska, John Cusack, Evan Bird