Ivan Cohen is a young boy living in Palo Alto, California. Unsatisfied by his slacker group of friends, his love for a girl who doesn’t know he exists and a dysfunctional family life, he is struggling to find his place in the world.

“Memoria” (2015 release; 70 min.) brings the story of Ivan. As the movie opens, we see a guy walking into the Golden Gate Bridge. Is he thinking of jumping off? We then go back in time, as we get to know young Ivan, whose father, a Russian immigrant, has returned to Russia. Ivan’s stepfather is the stern type, making awkward attempts to forge a relationship with Ivan. As Ivan grows older, he becomes even more distant from his mom and stepdad, and instead spends time with his friends. At this point we’re 10 min. into the movie, but to tell you more of the plot would spoil your viewing experience, you’ll just have to see for yourself how it all plays out.

Couple of comments: this is the second movie that is based on James Franco’s writings. In 2013 there was the okay “Palo Alto”, and now this. As in the earlier movie, Franco plays a small role, as the HS teacher who tries to help out van. Franco has maybe 10 min. of screen time. Indeed, the focus is not on Franco, but on Ivan (played by Sam Dillon) and his HS friends, whose idea of getting through the day is to do as little as possible, while partaking in drugs quasi constantly. As Franco’s character says: “I know how hard it an be to be a HS kid”, and indeed we feel Ivan’s pain and isolation. Ivan comments “I don’t care what they think”, but instead he does very much care, too much so indeed. An obvious question is why this movie is a mere 70 min., too short really to be a theater-ready full-length feature. Surely, the makers could’ve come up with, say, another 10 min. of material?

I had no idea that this movie was released (it premiered at film festivals in Fall of 2015, and then next spring went straight to DVD), and when I noticed it the other days at my local library, my curiosity was peaked and I had to check it out. It’s not a bad movie per se, but neither is it all that memorable. The similarities between this and the previous “Palo Alto” are obvious, but “Palo Alto” is easily the better of the two movies. 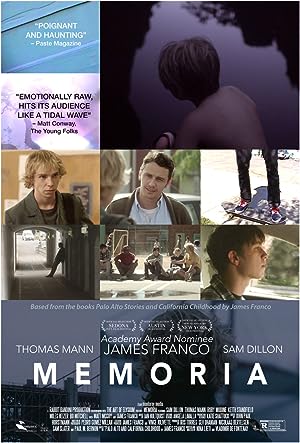 Be the first to review “Memoria 2015” Cancel reply