Based on the play of the same name, this movie tells the story of two boys who become friends at the start of the Troubles in 1970. The boys share an obsession with Butch Cassidy and the Sundance Kid (1969), with the consequence that they run away to Australia.

I felt so comfortable, and uncomfortable watching Mickybo and Me. It reminded me of my (happy) childhood but also of the bigotry (or, should I say ignorance and fear) which is still rampant in my country. The movie sums up succinctly how things spiralled out of control here

It was like this for me – I was the age of the characters as I grew up in Belfast. It was a great adventure to see red glows emanating from a Catholic ghetto when (I did not understand at the time) it was attacked by hoards of ignorant, angry and frightened individuals whose insecurity was used for the political ends of their religious and political peers. The majority of my friends were Protestant and I never hear a bigoted word from any of them. I was that unique individual. A Catholic, living in a middle class Protestant neighborhood, with a mother who converted to marry my Catholic father – and the crap that ensued from that.

The movie is an excellent first feature for it’s director. The art direction and camera work is excellent as is the acting talent of all leads. It’s great to see someone from Belfast doing so well – creatively – i.e. writer/director Terry Loane. 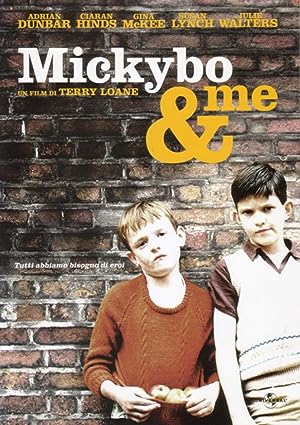 Mickybo and Me (2004)
95 min|Comedy, Drama|25 Mar 2005
7.3Rating: 7.3 / 10 from 1,838 users
This movie tells the story of two boys who become friends at the start of the Troubles in 1970. They share an obsession with Butch Cassidy and the Sundance Kid (1969), with the consequence that they run away to Australia.
Director: Terry Loane
Creator: Terry Loane (screenplay), Owen McCafferty (play)
Actors: John Joesph Mcneill, Niall Wright, Julie Walters, Ciarxc3xa1n Hinds

Be the first to review “Mickybo and Me 2004” Cancel reply