When Miss Stevens chaperones three of her students – Billy, Margot and Sam – on a weekend trip to a drama competition, she discovers that coming of age stories aren’t just for teenagers. Exploring the fine line between being a grown up and being a kid, MISS STEVENS looks at the moment you realize maybe you’re the responsible adult in the room, and what comes after you find out you’re not who you thought you’d be.

I caught this charming little indie on Netflix before I heard of Timothee Chalamet or had seen Call Me By Your Name. The plot revolves around a well meaning although slightly sad and lonely teacher, played by an excellent Lily Rabe, who takes three of her students to an out of town drama competition. One student, Billy (Timothee Chalamet), she is warned has emotional and behavioral issues.

From the drive to the festival to the rehearsals and social events leading up to the competition, the film is filled with both funny and poignant moments. Billy develops a crush on Miss Stevens and his charm and youthful energy draw her to him as well, something that both comforts and scares her..

What I loved about Timothee Chalamet’s performance was that he was always in character, always reacting in ways that subtly show he has feelings for his teacher. He is a depressed kid with possible ADHD, but he feels deeply and the longing he has for his teacher is moving and palpable. When he performs his monologue from Death of A Salesman, it’s clear he’s channeled those repressed feelings into his performance. It also may be the best I’ve ever heard that monologue done. At that moment, a star was born both in the film and in real life. 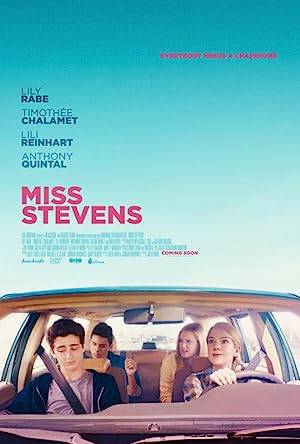 Be the first to review “Miss Stevens 2016” Cancel reply