A young mother drifts from one motel to the next with her intoxicating boyfriend and her 8-year-old son. The makeshift family scrapes by, living one hustle at a time, until the discovery of a mobile home community offers an alternative life.

Can someone actually change their life? That is the question Director/Writer Vladimir de Fontenay (primarily a Short’s director) poses in this gritty yet heart-wrenching look at wayward mother (Imogen Poots “That Awarkard Moment” 2014), her abusive and demanding boyfriend Evan (Callum Turner “The Only Boy Living in New York” 2017) – a role originally slated for Anton Yelchin before his death, her young impressionable son ( new comer Frank Oulton) and mobile home builder/seller Robert (Callum Keith Rennie “Californication “). What de Fontenay and cinematographer Benoit Soler do right here is place the audience directly in the seat of the actors, enable us to live their chaotic lifestyle and experience their cold Canada environment. Along with de Fontenay’s terrific realistic direction, across the board the actors make the audience despise who they are and what they are doing, yet equally make the viewer wish them better life choices. Young Outlon and Keith Rennie stand out here because they are so contradictory to what the stories premise. Thus, they keep the audience glued to the screen and their characters. “Mobile Homes” is an indie film that probably won’t make it to the big screen. However, you should find it in other formats. This film was screened at the Palm Springs International Film Festival 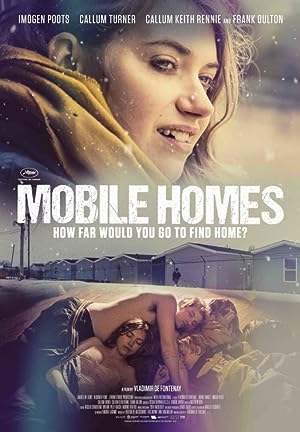 Mobile Homes (2017)
105 min|Drama|16 Nov 2018
6.0Rating: 6.0 / 10 from 580 users
A young mother drifts from one motel to the next with her intoxicated boyfriend, and her 8-year-old son. The makeshift family scrapes by, living one hustle at a time, until the discovery of…
Director: Vladimir de Fontenay
Creator: Vladimir de Fontenay, Danielle Lessovitz (Artistic Collaborator)
Actors: Imogen Poots, Callum Turner, Callum Keith Rennie, Roger Barnes