Jude Madigan abandons her husband Robert and her three sons without any explanation. Three years later Jude inexplicably returns to reunite her family. However Robert and his new lover Callie see Jude for the true psychopath she is and try their best to protect their sons. Jude embarks on a non stop stalking and harassment campaign against the family, and even seduces her eldest son Kess into committing her acts of violence.

Jaime Lee Curtis is one of my favorite actresses, but this movie is truly terrible. I was all excited when I saw it was coming on cable, but I couldn’t believe my eyes within only 20 minutes.

In the movie, Curtis plays a woman who abandons her husband and children and comes back, hoping to be welcomed back into thier lives with open arms. But she soon discovers that her husband has moved on with a new woman and wants a divorce. Then the movie gets really stupid, with childish pranks, as when Curtis spray paints “whore” on the side of the other woman’s car. She begins stalking the family and is even able to manipulate her oldest son into helping her. There is one awful scene where her son watches her walking around naked with “lust” in his eyes. The movie almost tries to imply incest between a woman in her late 30s and a child in his pre-teens.

I won’t spoil the ending for you, but it’s so stupid that you’ll wish I’d warned you firs 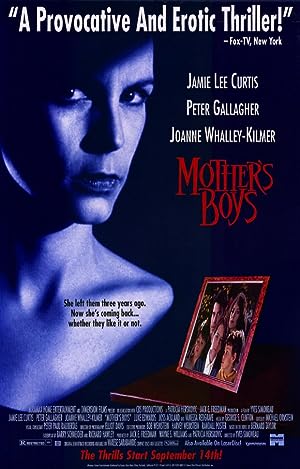 Be the first to review “Mother’s Boys 1993” Cancel reply