A ten year old boy gets tired of life with abusive parents and cashes in his piggy bank and steals a Mustang. He rides off into a surreal America playing “Motorama,” a game sponsored by Chimera Gas Company. He has various encounters with different people, and eventually reaches the Chimera Gas Company where he finds they are not playing by the rules of the game.

Let’s start from this point: This is not a movie intended for the common audience. Utterly bizarre, somehow incomprehensible, totally unpredictable, it just keep you stoned watching at the screen trying to figure out what will happen next. If that by itself doesn’t make you agree it is an excellent movie, then go back to your “family” movies and forget about MOTORAMA. It has material to be considered a cult movie, it can be placed in the same category with movies that win awards in Cannes or other intellectual film festivals, but, sadly, Hollywood already let if fall in oblivion, simply because it is not commercial. The performance of young Jordan Christopher Michael may not be Oscar material, but he gives the right touch to the story. Even the genre is difficult to describe; it is not a comedy in the proper sense, you don’t know if you are supposed to laugh at the strange situations in which Gus gets involved. It is more like an impossible adventure that some kids may wish to have, but don’t let them watch it either… it is not a movie for kids. So, if you like Disney movies or are looking for a “Home Alone” style, this one is definitively not for you. But if you enjoy reading Edgar Alan Poe or the works of Tim Burton, then you will like Motorama. So, jump in your red Mustang, get a tattoo spelling “Tora” and cruise Strangeland with Gus. I’d like that… 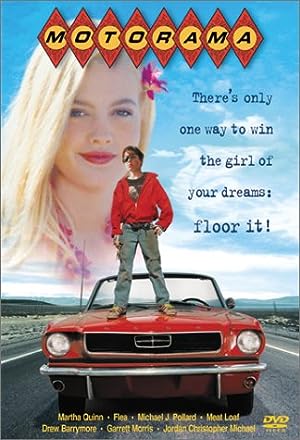 Be the first to review “Motorama 1991” Cancel reply