Home » Movies in English » Mowgli: Legend of the Jungle 2018

The story follows the upbringing of the human child Mowgli raised by a pack of wolves in the jungles of India. As he learns the often harsh rules of the jungle, under the tutelage of a bear named Baloo and a black panther named Bagheera, Mowgli becomes accepted by the animals of the jungle as one of their own, except for one; the fearsome tiger Shere Khan. But there may be greater dangers lurking in the jungle, as Mowgli comes face to face with his human origins.

After watching this, I felt really surprised on how good it was. Don’t expect it to be too similar to The Jungle Book. Mowgli is a more adult oriented film with some dark tones which I appreciate. I was very more focused on the actors. Everyone stands out. Even some actors that have small, but important roles. The CGI was the only thing that got under my skin. Some scenes had excellent visual effects, then exceptional, and then just plain horrible CGI. It feels like an unfinished film and took me away from the movie for a while. Maybe Warner Bros cut the films cost when they decided to go to Netflix. I feel really sorry for Andy Serkis. If Warner Bros would have let Serkis finish Mowgli. It would have been better than Disney’s version and Andy Serkis would get more praise when he clearly earns it. 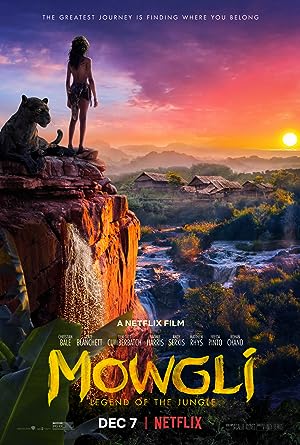 Mowgli: Legend of the Jungle (2018)
104 min|Adventure, Drama, Fantasy|07 Dec 2018
6.5Rating: 6.5 / 10 from 43,859 users
A human child raised by wolves must face off against a menacing tiger named Shere Khan, as well as his own origins.
Director: Andy Serkis
Creator: Callie Kloves (screenplay by), Rudyard Kipling (based on the stories of)
Actors: Christian Bale, Cate Blanchett, Benedict Cumberbatch, Naomie Harris