My Fair Son 2009 with English Subtitles

A father and son attempt to reconcile after years of estrangement in this tender drama from gay Chinese filmmaker Cui Zi’en. Ray was raised by his grandfather, and spent much of his youth railing against his traditional father’s middle class lifestyle. Upon enrolling in art school, Ray strikes up a relationship with another student, and the pair quickly becomes lovers. When Ray’s father discovers the two young men in bed together nude, he begins to better understand what it really means to be homosexual. But things get complication when Ray meets Bo, one of his father’s top employees, and falls hopelessly in love with the outwardly straight professional. Bo is engaged, and by becoming involved in a homosexual relationship he not only risks his professional livelihood, but persecution in his personal life as well.

For the first 20 minutes, there is some banter between, apparently, two sons and a father around the dinner table. Then the scene stops. The next morning, the son does some strange movements (naked butt showing) in front of a closed curtain, then opens it then the scene ends. Then the dad whines at the some for looking like he does. Then a messenger comes and there is a long scene setting up a Chinese Chess board and some bets made about the outcome then the scene ends. Now we have 2 unidentified guys wrestling the son on a bed until he gets a nose bleed. The dad organizes shoes and walks away. Do you feel the tension yet? If so, you must have a very boring life. And the scene ends. Nothing interesting happens at all. Suddenly the 3 guys are naked. More naked butts. All butts look alike. Boring. The tension is building. We are waiting for the appearance of a plot point. ANY PLOT POINT! ANY PLOT!!!!!! Dad finds the three naked boys and… walks away. The most interesting thing is how they three guys fell asleep in those positions. I expect that will be the high point of the movie. (It was) Outside now and long, loving closeups of chins and jackets. The raw tension is astounding!!! Ooooohhhhh, one guy climbed into bed with another guy and… the scene ended again. HEY, DIRECTOR!?!?!?! Did you have a script when you began shooting??? This is too bad even for MST3K! Now more chiding from the father then they play chess. Half way through now and NO PLOT! Son teaches father to play chess. Oh, the emotion, the drama. Chess! Can you believe it? The… Nothingness of it all. And now we get ping pong. And the cameraman must have been blind. Prefers shots of backgrounds or hoodies and jackets than faces most of the time. Ears and backs of heads got some footage, too. An hour and 25 minutes in and we finally got a plot point and then 4 minutes later the movie is over. Wow, what a ride! I cried, I laughed. I ate supper. At least, I learned how to play chess so it was not a total waste. 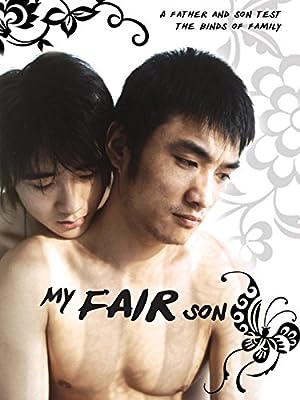 My Fair Son (2009)
92 min|Drama|12 May 2009
4.7Rating: 4.7 / 10 from 50 users
Ray enrolls in art school where he makes new friends and starts a relationship with another student. But when Ray's dad finds out about the relationship, he must begin to understand his own feelings toward homosexuality.
Director: Zi'en Cui
Creator: Zi'en Cui (script)
Actors: Junrui Wang, Wei-Ming Wang, Bo Yu, Guifeng Wang