If you haven’t seen the stage version of Naked Boys Singing! (NBS), then what more can you do but see this film. The film’s fun, campy, well-acted, well-sung and has lots of inspired choreography. However, compared to the live stage version, the film misfires conceptually, has truly cheesy “just graduated from film-school editing” and doesn’t do justice to the essential intimacy of the material — it neither delivers a good film nor a piece of theater-on-film. // Before writing this review, I watched the “making of” segment (titled “Nuts and Bolts”) to find out how the producer/director could have gone astray with excellent material and a stage production that literally sells itself. Biggest problem: They tried to reimagine NBS as a film, making the same sad mistake foisted upon A Chorus Line — both shows are perfect as-is and were designed to be seen in a theater from a center row in the Orchestra (and in the case of NBS, the second row): Why add all the superfluous cut-aways, back stories, reverse angles (again, an audience isn’t supposed to see what the actors see), cutesy effects (slo-mo, sepia tones, dissolves, multiple-image shots, etc.)? This screams “I’m trying everything they taught me in film school.” Moreover, introducing the numbers by showing the musical scores gives a documentary feel to what should be a live production. Why incorporate techniques from an dissonant genre? Hasn’t anyone seen the excellent Sondheim recordings of his stage productions? They record the performance. Period. That said, there is the issue of how to record the actors…no body mics. But somehow, when I saw NBS in New York in that intimate little theater in the Village, no one needed a mic. So, I reject the rationale that they had to lip-sync everything to get the recording. No, they had to lip-sync in order to support all the cheesy/cutesy editing techniques! So much time and effort could have been saved had they simply filmed the show in a, er, straight-forward fashion. Simple, direct, intimate…that’s what drives the NBS source material — and the film introduces too much schlock and unnecessary distractions. 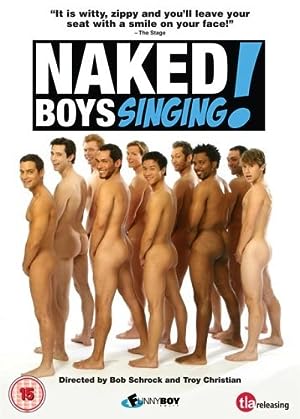 Be the first to review “Naked Boys Singing! 2007” Cancel reply