In the Nineteenth Century, orphan Oliver Twist is sent from the orphanage to a workhouse, where the children are mistreated and barely fed. He moves to the house of an undertaker, but after an unfair severe spank, he starts a seven day runaway to London. He arrives exhausted and starving, and is soon welcomed in a gang of pickpockets lead by the old crook Fagin. When he is mistakenly taken as a thief, the wealthy victim Mr. Brownlow brings Oliver to his home and shelters him. But Fagin and the dangerous Bill Sykes decide to kidnap Oliver to burglarize Mr. Brownlow’s fancy house.

Roman Polanski’s film is an authoritative take on Dickens’ classic. It is expertly paced, slowly immersing the viewer into the plight of the young orphan and its predicament in Victorian England. Through a meticulous period reconstruction, superb acting, and effective characterization (all the secondary characters are memorable), the typically Dickensian theme of the survival of Innocence against all odds is dramatized with utter conviction. The omission of the excessively melodramatic elements from the original story (Oliver’s family back-story for instance) contributes greatly to the story’s strength by minimizing any trace of implausibility or mawkishness, thus providing a wide-ranging portrait of the Victorian society with its intrinsic inequalities and its rather warped sense of justice. The visuals are splendid and the prevalent detached and non-judgmental approach to an easily emotive story is simply the signature of master director Roman Polanski, who is functioning here on top form. 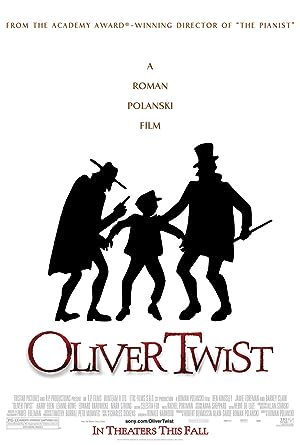 Oliver Twist (2005)
130 min|Crime, Drama|30 Sep 2005
6.9Rating: 6.9 / 10 from 28,913 users
An adaptation of the classic Dickens tale, where an orphan meets a pickpocket on the streets of London. From there, he joins a household of boys who are trained to steal for their master.
Director: Roman Polanski
Creator: Charles Dickens (novel), Ronald Harwood (screenplay)
Actors: Barney Clark, Jeremy Swift, Ian McNeice, Richard Durden

Be the first to review “Oliver Twist 2005” Cancel reply