A young Australian girl living in a small rural mining town prefers the company of her two imaginary friends, Pobby and Dingan, to real children. She ends up looking awkward during social gatherings and her only tangible friend is her older brother, Ashmol, who finds Pobby and Dingan annoying and often makes fun of them because he’s embarrassed by his sister’s behavior. Kelly-Anne’s and Ashmol’s father is an opal miner trying to earn a living, and their mother is busy trying to fit in as a member of the community. Both parents agree that it’s time for Kelly-Ann to move on and leave her fantasy world behind – but when they force her to grow up too fast with a hasty decision, Pobby and Dingan are killed and Kelly-Ann falls into a grief-stricken illness. The only one who can set things right is Ashmol.

It’s a warm holiday season in the South Australia mining town of Coober Pedy, and for the Williamson family, festivities are juggled around nine-year-old Kellyanne’s devotion to her invisible playmates, Pobby and Dingan, and her dad, Rex’s, single-minded pursuit of the perfect opal.

The hypnotic gems possess a dangerous allure, as the girl’s brother, Ashmol, says in his framing narration to “Opal Dream.” Everybody comes to the place to dream — presumably about a better life somewhere — as they dig for opals. The more you dream, the deeper you want to dig, but if you dig too deep, you might never get out — never wake up, he says.

For the Williamsons, the town offers dreams and not much else. Rex hopes to strike it rich for his wife, Annie, and their kids. But after a year in town, they don’t have much. Rex needs a bit of luck at the races to afford the kids’ Christmas presents.

Moving to Coober Pedy has taken the hardest toll on Kellyanne, for whom Pobby and Dingan are two very real people, and she shares with everyone her enthusiasm for her friends’ artistic, gentle, natures. “They’re pacifists,” she explains.

Her teacher says Kellyanne has a vivid imagination but she’s a dreamer who doesn’t have many friends — “she doesn’t find people very easy.” When Rex complains about Pobby and Dingan, Annie points out that they’re as real as opals are to him.

Rex has his share of more tangible problems. He has relocated after an apparently minor brush with the law, and he finds himself in a community of narrow-minded ruffians who don’t coddle to “ratters” — blokes that come around at night and noodle around your claim for highly prized colored opals.

Adapted from a Ben Rice novel, “Pobby and Dingan,” the movie “Opal Dream” is the story of Rex’s reconciliation with his new town and his growing family as two crises unfold.

It all starts off innocently. In a clumsy but well-meaning attempt to wean his daughter off Pobby and Dingan, Rex offers to take the amorphous pair along to the mines with him and Ashmol while she and Mom go to a holiday party. Kellyanne agrees, but when he comes home without her unseen sidekicks, Kellyanne talks him into going back to look for them. When he does, the bloke at a nearby mine discovers Rex on his claim and calls the cops.

Rex is soon headed to a hearing to face mining violation charges. Worse, the whole town turns on the family: Annie loses her job at a grocery store and, when Ashmol goes for a bike ride, he finds a rat swinging from the handlebars left by a gang of jeering kids. Again, Kellyanne gets the worst of it — without Pobby and Dingan around, she falls ill and, to the bafflement of her doctors, steadily deteriorates.

The way the reconciliation is achieved carries the story satisfactorily through Act III. But the climax and resolution are squeezed together so tightly that the outcome for all the characters can only be described as ambiguous, especially for poor Kellyanne, whose actions were only the metaphor for her family’s isolation. 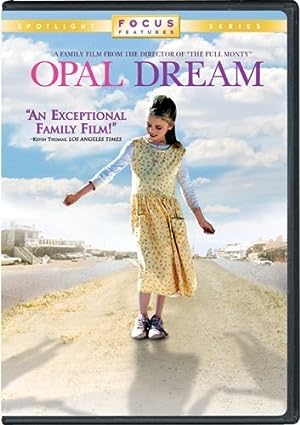 Be the first to review “Opal Dream 2006” Cancel reply