Self-made businessman Harry Papadopoulos has got it all; a mansion house; awards and a super rich lifestyle. However, on the eve of a property deal of a lifetime, a financial crisis hits and the banks call in their huge loans. Harry and his family lose everything in an instant. Everything, except the dormant and forgotten Three Brothers Fish & Chip Shop half owned by Harry’s larger than life brother Spiros who’s been estranged from the family for years. With no alternative, Harry and his family, plant enthusiast James; fashion victim Katie; nerdy Theo and their loyal nanny Mrs. Parrington, are forced to pack their bags, leave their millionaire lifestyle and join ‘Uncle Spiros’ to live above the neglected Three Brothers chippie. Together they set about bringing the chip shop back to life under the suspicious gaze of the their old rival, Hassan, from the neighbouring Turkish kebab shop whose son has his own eyes on Katie. Each family member must come to terms with their new life in their own way and make the most of their reduced circumstances. Harry struggles with the banks to regain his lost business empire, but as the chip shop comes to life and old memories are stirred Harry and his family gradually discover that only when you lose everything are you free to discover it all.

I started following Marcus Markou on Twitter when he was getting ready to film Papadopoulos and Sons and was going to be tweeting about it along the way. As an aspiring filmmaker, I thought this would be an interesting feed to follow. And indeed it was. Here we are one year and a couple months later and Marcus has taken the film to a few film festivals, screened it a couple times in London and lord knows what else. Since I don’t live in a city where any of these screenings were, Marcus sent me a screener copy of the film. And these are my thoughts on it.

I had a feeling from the trailers and teasers that Marcus released, that I would like Uncle Spiros and I absolutely adored him. I’ve checked out George Corraface’s IMDb page and I’ve not seen a single thing he was in, so he was “all new” to me and he was wonderful (the character as well as the actor).

My friend and I noted how much we liked Marcus’ script as well. He’s a great writer. Nothing ever felt awkward or forced. Very fluid and coherent dialogue throughout. And VERY funny! We had some good laughs, at the dialogue as well as some of the reactions or expressions pulled by some of the actors.

Marcus was very lucky to get a cast of some superb actors. It was about 50/50 on actors I was familiar with, and (most of) those who I wasn’t familiar with did a great job. Ed Stoppard was campy and funny. Georgia Groome was snarky and fabulous. Thomas Underhill was a RIOT. And Stephen Dillane…. seriously… seeing him in a comedic role (as well as a couple of VERY moving scenes), just solidifies how multifaceted he really is.

The one that I was most impressed by (which, really, shouldn’t shock me at all, given who his dad is), was Frank Dillane (who I’d never seen before). His character was so sweet and charming, and he never missed a beat. More than delivering the lines… he succeeded in delivering the feeling. Just really, really well done, Frank! I hope he’s continuing on this track, because that kid definitely has the gene.

I can see why Papadopoulos and Sons won the Audience Choice Award at the Thessaloniki Film Festival in Greece. Everyone should be very proud of that. It really is a delightful film. It’s honest and beautiful. It’s a story everyone should see. 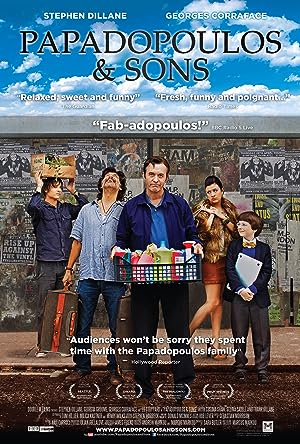 Be the first to review “Papadopoulos & Sons 2012” Cancel reply