Michael Laemie (played by Brian Madorsky) is a young boy living in a typical 1950’s suburbanite home… except for his bizarre and horrific nightmares, and continued unease around his parents. Especially his father, Nick Laemie (played by Randy Quaid). Young Michael begins to suspect his parents are cooking more than just hamburgers on the grill outside, but has trouble explaining his fears to his new-found friend Sheila, or the school’s social worker.

Although directed by Bob Balaban of all people (most will know him as one of Christopher Guest’s regulars in his series of comic pseudo-documentaries like “Best in Show”), “Parents” is clearly heavily influenced by David Lynch (Lynch’s regular composer Angelo Badalementi is put to good use here by Mr. Balaban). One wonders if this is what life was like for David Lynch growing up as an Eagle Scout in the picture perfect 1950’s. This is one of the most disturbing darkly comic horror movies I have ever seen. My jaw hung open for the film’s entire length, my heart was racing at the climax in the cellar, and by the time the “sitcom-style” end credits rolled I was laughing out loud.

The film is told from the point of view of a 10 year old boy growing up in a cold, sanitized, and Uncanny 1950’s suburbia with his parents who are so perfect they are down-right creepy (played wonderfully by Randy Quaid and Mary Beth Hurt). The kid knows something must be up, and the film eerily displays the dark fantasies that can develop in a child’s mind when he isn’t quite sure why the world is the way it is and that everything seems slightly off-kilter. We’ve all had these feelings when lonely and isolated and it is especially apparent in those odd pre-teen years when we are old enough to know the difference between fantasy and reality yet not mature enough to handle just what that reality now is. What essentially happens in this film is the young boy walks in on his parents having sex one night after waking up from a nightmare and then develops a bizarre fantasy where they have become cannibals. Freud would have a field day with this film. Balaban puts the psycho back in psychosexual with the kind of wanton abandon only Hitchcock, Kubrick, and Lynch have previously dared. The latter half of the film follows the conventions of your standard horror flick and does it so beautifully you will be left shivering. Sublime, satirical, uncanny, and as near perfect a cult film as you could ask for. 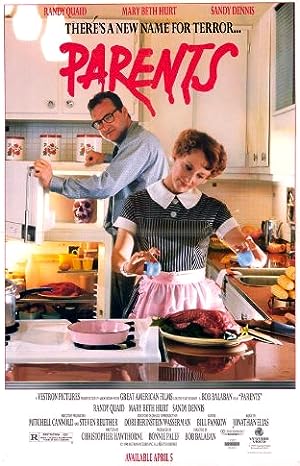 Be the first to review “Parents 1989” Cancel reply