The sensational success of „Malizia” obviously called for a sequel of some kind. So one year later, in 1974, most of the „Malizia” production staff including the main actors, Laura Antonelli and Alessandro Momo, came back together to shoot „Peccato veniale”.

Somewhere on the beaches of Tuscany, in the 1950ies, a well-off family spends their vacation. The old parents, constantly quarreling, are the least of the problems of their son Sandro. Sixteen years old, pubescent, rebelling, spending the days with his friends playing pranks and starting to get interested in women. However the only woman he is seriously interested in, is the beautiful Laura (guess the actress?), the wife of his older brother Renzo. And while Renzo is usually out for „business” reasons, Sandro and Laura get to spend a lot of time together on the beach…

Well, that’s the obvious and constructed vehicle to replicate the success of „Malizia”, bringing the same two actors back together in a romantic situation. But apart from that goal, the two films are not really comparable. This is because „Malizia” has a strong dark side to it, the sexual tensions there are not mutual, but forced. The characters are credible and you can sympathize with them. In addition, although usually categorized as comedy, the humor is subtle, clever and discreet, and you could easily call it a drama film with social comment as well.

„Peccato veniale” is quite different in all of these respects. The gags come with a wooden mallet and are usually not very good. Slapstick-style sequences on the beach you would expect of some cheap „Insegnante” flicks, but not of a production like this. The family mechanics are not much better, though, and it’s only good old Lino Banfi who made me smile a couple of times. These „comedic” elements are predominant in the first half of the movie. The script is trying hard to be more funny than „Malizia”, but can achieve that only by making basically a fool out of all the characters, except for Laura and Sandro of course.

Their relationship is developed rather lacklustre until it gets momentum after the first half. It’s not too badly written from then (most of the earlier beach nonsense ceases) and felt convincing to me, albeit not surprising at any point. Initially Laura doesn’t even notice Sandro’s interest in her, then she does, but smiles about it, until she develops feelings of her own. This is actually inevitable in view of her husband Renzo who is so completely stupid and unbearable you wonder what made her marry him in the first place. Once you consider this, you can see the problem that somewhat limits the characterization of Laura. On the part of Sandro, it’s mostly the same as with „Malizia”‘s Nino, but without the dark, cruel elements. Missing those, it’s doesn’t take too long to imagine how „Peccato veniale” will turn out.

For Laura Antonelli, this is probably the last time she took the role of a youthful, naive love interest. It barely works out here, and she did well to choose more mature and better roles after 1974. Nevertheless, she is absolutely radiant throughout the film in her implausible beauty. Apart from very sexy beachwear and a couple of shots in semi-transparent lingerie, there is no nudity at all – rather surprising that they didn’t want to beat „Malizia” in this regard.

So overall, this is the more shallow, comedic and forgettable follow-up to „Malizia”, and in spite of the many similarities, there are even more differences. If you liked „Malizia”, it’s not necessarily the case you’ll like „Peccato veniale” as well. While it’s okay to watch, the rather low level comedy of the first half dragged it down for me and it took long until it could grasp me a little. Overall it’s a slight disappointment, and it totally fails to top „Malizia” in any way. 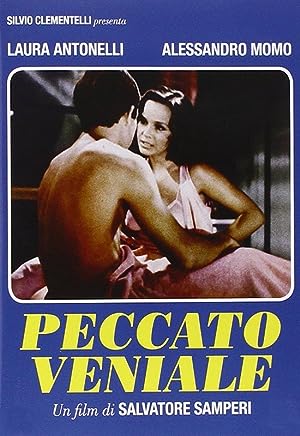