Mike, a young teenage boy who has just lost his parents, afraid to lose his brother follow him to a funeral, where Mike witnesses the Tall Man lifting a coffin on his own. Mike decides to investigate, and discovers that the Tall Man, protected by his flying spheres, is shrinking dead bodies down to half their normal size and reanimating them as slaves. It is then up to Mike, his brother, and Reggie the ice cream man to stop the Tall man.

A teenage boy (Michael Baldwin) stumbles upon a plot by a very tall mortuary worker (Angus Scrimm) to steal dead bodies and turn them into midget slaves for an alien world. With the help of his older brother (Bill Thornberry), the boy hopes to cut the tall man down to size.

Many years later, Don Coscarelli is now seen as a master of horror and Angus Scrimm somewhat of a horror icon (though to a lesser degree than, say, Robert Englund). While the plot I have outlined above may sound silly, the actual execution of this idea makes it clear why this film has really lodged itself in horror history and spawned numerous sequels (all starring Scrimm).

This film captures the feeling of the late 1970s and early 1980s horror with the young boy stumbling upon a plot of large, sinister proportions. Horror geared towards the youth of a generation who have parents who may not believe them (or in this case, an older brother). I really like this theme, much like “The Goonies”, “The Monster Squad” and “Lost Boys” — a kid’s film without being childish.

“Phantasm” has become known for the silver balls, and believe me — when Angus Scrimm puts one of his balls in your face, you won’t be happy about it. A bloody mess is all you will get! I really enjoyed the effect of this (remember, this is 1979 when effects still took some creativity). Some of the tricks they pull off are impressive considering computer technology of the day, and also considering Coscarelli himself was writing and directing at the unthinkably young age of 23.

Now, some things I did not understand. For example, why are the midgets bleeding macaroni and cheese instead of blood? And more importantly, why does the tall man have to transform into a woman to stab people in the cemetery? If he is super strong and has those silver balls, he really does not have to be very sneaky about the whole ordeal, does he? But these are issues that can always be addressed in sequels.

Some of the acting is cheesy — people deliver their lines in a way that sounds forced, and Jody (the older brother) looks like he belongs behind the wheel of the General Lee. And Michael spends half the film looking like a girl. (I have met the entire cast, and I can assure you that Baldwin grew out of this phase.)

But, seriously, check this film out. Created roughly in the same time period as “Halloween”, you are left with a similar feeling. Only this one is more light-hearted and “feel good” and less “the embodiment of evil”. I suppose it depends on your personal taste or your mood for the day. Myself, I like a little bit of the unusual thrown in to a movie just to keep me guessing. And, edging out “Halloween”, this may be the longest-running horror franchise, running from 1979 through 2016 (37 years!).

Over the years, “Phantasm” has been released in a variety of ways, but I think the definitive release finally exists thanks to Well Go USA. I asked Coscarelli why he went with Well Go (known for their martial arts movies) rather than Arrow Video or Scream Factory, and his answer was quite simple — they had the most enthusiasm. And they have put together a nice package, too. The remastered Blu-ray looks sharp. WGN host and super-phan Nick Digilio screened it in Chicago in August 2016 and audiences were shocked to see individual raindrops. The new scan is better than the original print. The disc also contains a vintage interview with Coscarelli and Scrimm circa 1979, and an episode of “Graveyard Carz” where Coscarelli and Baldwin drive around in a Barracuda tribute car. 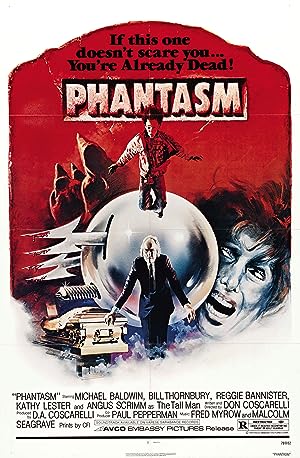 Phantasm (1979)
88 min|Horror, Sci-Fi|28 Mar 1979
6.8Rating: 6.8 / 10 from 28,409 users
A teenage boy and his friends face off against a mysterious grave robber known only as the Tall Man, who keeps a lethal arsenal of terrible weapons with him.
Director: Don Coscarelli
Creator: Don Coscarelli
Actors: A. Michael Baldwin, Bill Thornbury, Reggie Bannister, Kathy Lester

Be the first to review “Phantasm 1979” Cancel reply