Brothers Samuel and Beckett Emerson are barely scraping by. Their father, Warren, continues to gamble and drink away any money they bring home. With all the havoc that is constantly going on in their lives, the family members each find solace in his own way, through Shakespeare, comic books and impossible love affairs. Beckett seizes the opportunity to make some easy money by counterfeiting in hopes of repaying his father’s debts. When Beckett’s plan goes awry, the family must decide to change their ways or pay the ultimate price

It’s a very good film, better than many films “Sam” is growing up The story is about brothers Samuel and Beckett Emerson long ago found a way to keep their family afloat despite their drunken father’s nasty gambling habit: While Samuel distracts crowds of passerby with his Shakespearian monologues, Beckett, a master pickpocket, makes his way through the unsuspecting crowd. And then their small, impoverished world crumbles when their father gets in over his head with a dangerous loan shark. Shakespeare and petty thievery are abandoned for Samuel’s belief in the super powers of his comic book hero, Phantom Halo, and Beckett’s friend’s ability to counterfeit the perfect $100 note. Suddenly, the small- time world as the Emerson family knew it is turned upside down as the brothers do all they can to break free from the mud that traps them. 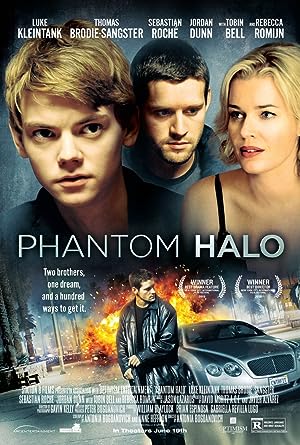 Be the first to review “Phantom Halo 2014” Cancel reply