Persecuted by his father for being different, androgynous boy Davide, 14, leaves home to live on the streets of Catania.

When Davide (newcomer Davide Capone) is first spied through the tiles of a mirror, gazing intently at the reflected image while moving from panel to panel, the androgynous face staring back doesn’t betray gender. A shock of long red hair blazes brightly in the dimly lit room, and when the hovering form comes to a stop, it is to draw with makeup upon his own likeness. Every inch of the surrounding walls are plastered with glam iconography, from David Bowie as Ziggy Stardust to famous actresses. Darker Than Midnight (Più buio di mezzanotte) is purposeful with its ambiguity, asking audiences to embrace a character striving to be comfortable in his own skin, before presenting a painful world that does just the opposite.

Next, the fourteen-year-old David is spotted rushing along a darkened street, abandoning his mobile phone as a call comes through. His wander around the Sicilian city of Catania, and the friends he collects, is punctuated by flashes of an unhappy upbringing. At home, David was a disappointment to his dominating, abusive father (Vincenzo Amato, War Story), with his mother (Micaela Ramazzotti, Those Happy Years) sympathetic but helpless to intervene. After running away, he finds the acceptance he craves with the welcoming La Rettore (Giovanni Gulizia) and his fellow hustlers, all united in having nowhere else to turn to, though their life is far from happy or easy.

Bearing an ‘inspired by a true story’ disclosure at its outset, Darker Than Midnight forms its foundations from the early years of Davide Cordova, better known in Rome as drag queen Fuxia. In writer/director Sebastiano Riso’ and his co-scribes Stefano Grasso (We Were Twenty) and Andrea Cedrola’s hands, his story is neither an achieving-your-dreams fantasy nor an astute look at existence on the margins, but a hybrid of both heavily indebted to the conventions of the coming-of-age genre. The troubles of Cordova’s youth, as well as those many transgender and gay teens face, are loaned to a traditional rendering of adolescent angst and sexual awakening. Parents don’t understand, friends become family, and tragedy changes worldviews. Intimacy proves both harsh and fleeting, violence threatens while offering an escape, and a calling comes from adversity. The list of typical tropes is well and truly marked off.

Indeed, the shadow of many a movie maestro lingers long and large over Darker Than Midnight, notably those who made their initial cinematic statement by depicting the awkward process of maturity. First-time filmmaker Riso follows firmly in the footsteps of François Truffaut’s The 400 Blows in presenting a protagonist brutally pushed from the nest, as well as Gus Van Sant’s Mala Noche in exploring a grittier shade of growing up. Like each, thankfully, Riso also boasts a beguiling star. In his film debut, the naturalistic sixteen-year-old Capone captivates with fragility befitting Davide’s predicament, seemingly passive as prejudice overwhelms him, but burning with emotion that rages rather than simmers.

With his cinematographer Piero Basso (The Secret Village), Riso endeavours to counteract standard narrative developments with expressive visuals that essay the grime of the streets and the colour of the characters; however the confidence of the imagery can’t escape an obviousness in technique – the camera circling around the room to avoid showing the feature’s most devastating moment, for example – that matches the film’s entire handling of its subject. A softened take on a difficult experience, in style and substance Darker Than Midnight is fuelled by good intentions and genuine empathy but tempered by convenience and stereotypes. 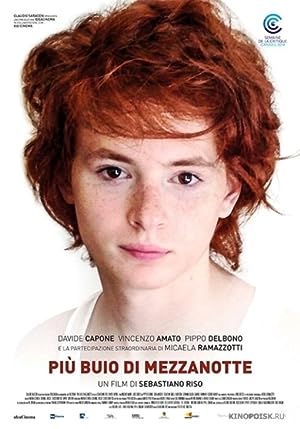