Phillip Filmore is a naive, 15-year-old, preoccupied with sex, who develops a crush on Nicole Mallow, the new 30-something, French housekeeper and sitter to look after him when Phillip’s father is out of town for the summer on a “business” trip. But Mr. Filmore’s unscrupulous chauffeur, Lester Lewis, takes advantage of Phillip’s crush on Nicole to hire her to seduce the youth, then draws her into a plot to fake her own death in a blackmail scheme aimed to drain Phillip’s trust fund.

Every boy’s wet dream… well that’s how the early 80’s sex teen comedy “Private Lessons” plays out… and maybe more audacious than most with its precariously lurid context. While I wouldn’t call it one of the best of its sub-genre, it still was rather a popular and influential outing that would spawn knockoffs like “Homework”, “My Tutor” and to some extent “Class”. This is one of those films that its best to just go along with its low-brow attitude, as its quite asinine (especially the plot progression)cringe-like (with the circumstances characters find themselves in) and smutty. But then again the hormones run wild. Older lady… young boy. What fantasy can you think up?

15 year old Philly Fillmore’s father has gone away on business, where he’s left home alone with Nicole the new French housemaid. Soon Philly becomes infatuated in her, but her open advancements towards him come at a surprise. While shy at first, she slowly starts gaining his affection. But unknowingly to him, his crooked chauffeur Lester has blackmailed Nicole to seduce Philly in the scheme of getting money out of him.

What the film has going for it is the iconic soundtrack of buoyant tunes from the likes of Rod Stewart, Eric Clapton, Crazy Horse, Air Supply and Earth, Wind & Fire. It was like a jukebox at times with some oddly placed tunes. The other distracting element (other than spending a lot time leering of its attractive female cast and extras) was that of European goddess, Emmanuelle’s Sylvia Kristal as teasingly upfront foreign housemaid. She looks beautiful; the best moment arises when she seductively strips in front of a gobs-smacked Eric Brown. Although another body double was used for Kristal’s nude scenes. Eric Brown plays the gawky naïve young lad Philly whose curiosity turns to obsession — in what he believes is love for the housemaid. Howard Hesseman is good as the deviously slim bag chauffeur Lester and Ed Begley Jr. has fun with his little support role. In one humorous sequence he does his best “Dirty Harry” persona with Hesseman at the end of it. Patrick Piccininni plays Philly’s obnoxious pal Sherman and Pamela Jean Bryant is Sherman’s stuck-up older sister that Philly kind of fancies. Or better put likes to see naked. Ron Foster turns up as Philly’s father and Dan Barrows amusingly chips in as the gardener. Also showing up in minor, but enjoyable parts are Peter Elbling, Dan Greenberg (the writer) and a delightfully titillating Meridith Baer as an uptight school teacher. It’s technically well-made by director Alan Myerson and breezily paced with Greenberg’s simple material. 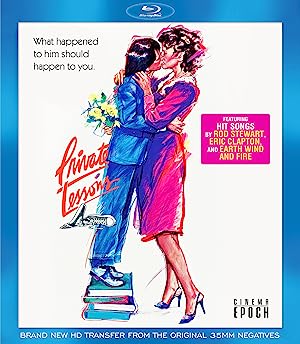