On Christmas Eve in Finland, Santa Claus is unearthed in an archaeological dig. Soon after, children start disappearing, leading a boy and his father to capture Santa and, with the help of fellow hunters, they look to sell him back to the corporation that sponsored the dig. And then there’s Santa’s elves, who are determined to free their leader…

For me this is one of those films that I just instantly took to heart, it has the sort of implicit comedy that you expect from the Cohen brothers, and a theme which really plays with your ideas of horror. It does help if you have a bit of background in Finnish mythology, there’s no explanation, even in the subtitles, of the yule goat, and the word Joulupukki’s close links to old stories about a sort of mischievous Christmas devil. It does introduce some of the old stories, but doesn’t explain how they are actually commonly known history pertaining to Father Christmas in Finland, and weren’t made up for the film or anything like that. Other than that, the film is visually beautiful, musically dramatic to at least the extent that Danny Elfman had ever achieved for Tim Burton, and has a sort of dignity that something with an undercurrent of comedy rarely has, relying on its ability to be funny without trying, something that Quinten Tarantino and the Cohen Brothers often leave us slack jawed over. I definitely recommend it. 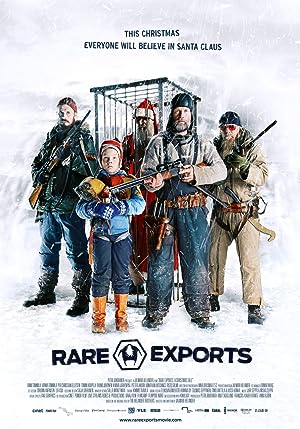 Rare Exports: A Christmas Tale (2010)
84 min|Adventure, Fantasy, Horror|03 Dec 2010
6.7Rating: 6.7 / 10 from 23,886 users
In the depths of the Korvatunturi mountains, 486 meters deep, lies the closest ever guarded secret of Christmas. The time has come to dig it up. This Christmas everyone will believe in Santa Claus.
Director: Jalmari Helander
Creator: Jalmari Helander, Jalmari Helander (based on the original idea by), Juuso Helander (based on the original idea by), Petri Jokiranta (dramaturge), Sami Parkkinen (dramaturge)
Actors: Onni Tommila, Jorma Tommila, Tommi Korpela, Rauno Juvonen