A young man runs away from his family to become an actor.

Luxembourger writer-director Anne Fontaine has tackled all kinds of subjects and often attracted big names, recently international ones, to her films. Here she tackles a coming of age drama that appears to be based on a real-life story although no source material is credited. Sissy schoolboy Marvin grows up to be an actor, who tells his hard-luck story on stage and in print. That’s about all there is to it and the tale seems overstretched at nearly two hours; but it’s done with great integrity, the screenplay is intelligent, and there are sincere performances from the two actors representing the boy at different ages. The elder Marvin is played by British actor Finnegan Oldfield, who seems only to work in France. Marvin gets to co-star in his play with the great Isabelle Huppert, who has been in three of Fontaine’s films. Here she plays herself, which is a strange conceit. Also unusual is the structure, which has flashes forward until grown-up Marvin’s story gradually predominates. The film will impress anyone who wants high quality work in all departments but particularly those who were bullied or are being bullied at school for their sexuality. “Reinventing Marvin” is an encouragement to rise above it. 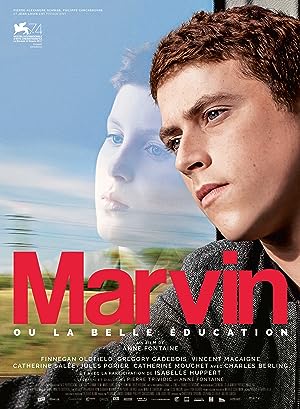