Annabel is a terminally ill cancer patient and is quietly awaiting her death spending her time studying nature. Enoch is struggling to recover from the death of his parents and spends his time attending funerals with his only friend – a ghost named Hiroshi who was a WWII Japanese kamikaze pilot. Just as Annabel’s sister is trying to cope with Annabel’s impending death, Annabel and Enoch fall in love. They both finally have a reason to live, but is it too late to have a life together?

Enoch Brae (Henry Hopper) is a morbid teenager that enjoys attending funerals. He meets the teenager Annabel Cotton (Mia Wasikowska) in a memorial service and they start to see each other. Enoch has lost his parents in a car accident and lives with his aunt Mabel (Jane Adams). His best and only friend is the ghost of the Japanese kamikaze pilot Hiroshi Takahashi (Ryo Kase) and Enoch neither goes to school nor has a car. Annabel is terminal with brain tumor and lives with her sister Elizabeth (Schuyler Fisk) and her mother Rachel (Lusia Strus). She loves to read about birds, especially the water birds. Soon the unlikely couple falls in love with each other improving their lives.

“Restless” is a beautiful, romantic and sad movie about love, life and death. Enoch Brae recalls Harold, from “Harold and Maude”, a teenager with a trauma attracted by memorial services. Mia Wasikowska is wonderful in the role of the sweet Annabel, a teenager terminally ill that loves life. The story is sensitive and their romance is heartbreaking. My vote is eight. 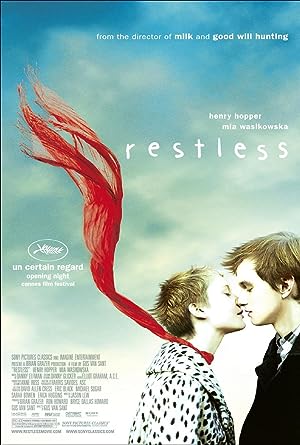 Be the first to review “Restless 2011” Cancel reply