Colm is in his mid-forties, married, with two teenage children. Still grieving the death of his father, a destructive gure in his life, Colm struggles with his relationship to his own son, whilst at work a recent takeover threatens his job. Unable to share his vulnerability with his wife, Colm’s world is falling apart around him. In the midst of this crisis, Colm solicits sex from a young man called Jay. This encounter and his growing infatuation has a deep effect on Colm. He finds a comfort in Jay that no one else can provide.

Tom Vaughan-Lawlor (“Colm”) is a forty something dock manager from the port of Dublin who has a scary encounter with a young man in the toilet of shopping centre and ends up being robbed. Next day the young man “Jay” (Tom Glynn-Carney”) turns up in his office to extort even more from him. “Colm” has a drink problem, has recently lost his father, is facing redundancy and is trapped in a loveless (certainly sexless) marriage and has a diffident, recalcitrant son. All this contrives to drive him towards an emotionally addictive relationship with his erstwhile mugger. The whole thing is a bit rough around the edges, but the two leads perform strongly and we get a slight inkling as to what drove both men to where they are now. Don’t expect a conclusion; there isn’t one – and it does wallow a little in confused self-pity as only us Celts can – but it is worth a watch. 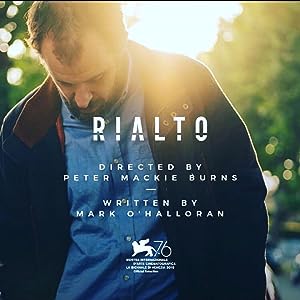 Rialto (2019)
90 min|Drama|08 May 2020
6.5Rating: 6.5 / 10 from 86 users
Colm, mid-40s has a comfortable life: a managerial job in Dublin's docks, two teenage children, and a kind, loyal wife in Claire. After the death of his father, a destructive figure, Colm's emotional life cracks open, and his downward spiral continues when he is made redundant. Drinking heavily and unable to confide in Claire, Colm finds himself drawn to Jay, a 19-year-old who dabbles in …
Director: Peter Mackie Burns
Creator: Mark O'Halloran
Actors: Tom Vaughan-Lawlor, Tom Glynn-Carney, Monica Dolan, Sophie Jo Wasson