Amateur sleuths Rico and Oskar deal with thieves of a valuable stone.

“Rico, Oskar und der Diebstahlstein” is a recent German movie that was released this year and is already the third entry to the Rico&Oskar series in terms of movies. All of these are based on Andreas Steinhöfel’s books. The director here is Rico, Oskar und der Diebstahlstein and she also was in charge of the very first film. This is one reason why I hoped this third film can be better again. I liked the first film and I felt the second film was clearly inferior. My verdict for this third movie is that it is not as good as the first, but also not as bad as the second, so something in-between. I guess I am referring to the two halves here for the most part. The first 45 minutes were decent, the second were underwhelming.

I criticized in terms of the second that I did not like the child actor’s performance (Rico), but I think he somewhat redeemed himself here. I am pretty certain, however, that I will always prefer Oskar. The main problem with this third film was the story, the plot. It picked a similar path again like the previous films focusing on funnily confusing behavior and speech patterns of the protagonist that were supposed to add charm to the film and also do on some occasions. But there were so many aspects in terms of the story that did not really make sense, especially the main plot. Why would they travel so far for somebody they don’t even like. And Oskar’s motivations also don’t make a lot of sense in my personal opinion.

The film scores a bit through its awkwardness and it is really not a 100% feel good film. For example, it starts right away with the death of a supporting character from the previous films. At least they sent some characters on holidays this time instead of making many scenes with them that added nothing like in the second film. And finally another criticism on realism: The gay couple is exactly where the boys are. Same goes for the twin girls. I don’t think so. Sorry. There were good moments here no doubt, but it just wasn’t enough of them I have to say. I cannot recommend this kids movie. There are many better ones out there, also from Germany and looking at all the big and known names we have in here, the outcome is a disappointment. 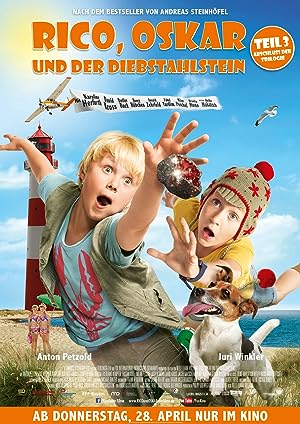