An adult victim of childhood sexual abuse confronts the horrors of his past.

Romans follows labourer Malky (Bloom), a victim of sexual abuse at the hands of a priest. When tasked with demolishing the local church where he was abused as a twelve year old, the deep-rooted effects of this attack rear their head. Malky’s relationship with girlfriend Emma (Janet Montogomery) begins to crumble as he indulges in bouts of violence against himself.

Opening with an intensity that the filmmakers maintain throughout, we are hit with the staggering shot of the church’s cross being brutally sledge-hammered, set against ferocious religious preaching captured through loud, visceral sound design. This destruction of religious iconography captures Malky’s distance and deep-set resentment for the church, something which triggers his aggressive and destructive behaviour throughout the feature. Malky is a painfully troubled character, unable to express or recount the events which haunt him, leaving others shocked and confused by the extremes of his behaviour. His girlfriend Emma is isolated and confused, whilst his mother (played with a fantastic authenticity by Anne Reid) has a lingering sense of disappointment and sadness in her son’s behaviour.

Thompson’s screenplay is deeply effective in establishing the rooted destructive power that abuse has. We feel sympathy for Malky as we see him physically and sexually abuse himself – exploring the sense that he feels he deserves to be punished – a stirring reflection on the sadness of the victim mentality. Yet Malky is a stand-up character – loving to his mother and willing to sacrifice himself for friends, we see glimmers of the upstanding person beneath the shame and anger that lingers due to his abuse. This makes Malky all the more an endearing character, one that we can get behind as an audience.

Romans is mature enough to capture both sides of the church exploring the ghosts of abuse and mistrust (in the form of returning old priest and abuser, Jimmy – James Smillie), yet juxtaposing this with a sense of redemption and forgiveness in the form of reformed-prisoner, turned priest Paul (Charlie Creed-Miles). This is a project centred partly on the power of forgiveness perfectly channelled in the film’s regular references to Romans 12:20.

The beating heart of Romans is a sublime leading performance from Orlando Bloom. This is a performance that respectfully captures the subtle pain, shame and hurt that plagues victims. Bloom is at his most raw and transformative here in a performance that simmers with tension throughout the film’s runtime. Like Bloom’s performance, The Shammasians direct with a taut sense of tension and unease ensuring that Romans is a film that commands your full attention. 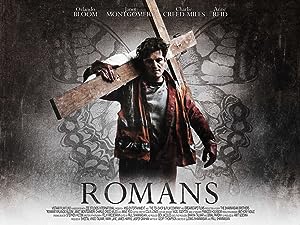 Be the first to review “Romans 2017” Cancel reply