ROOM tells the extraordinary story of Jack, a spirited 5-year-old who is looked after by his loving and devoted mother. Like any good mother, Ma dedicates herself to keeping Jack happy and safe, nurturing him with warmth and love and doing typical things like playing games and telling stories. Their life, however, is anything but typical–they are trapped–confined to a 10-by-10-foot space that Ma has euphemistically named Room. Ma has created a whole universe for Jack within Room, and she will stop at nothing to ensure that, even in this treacherous environment, Jack is able to live a complete and fulfilling life. But as Jack’s curiosity about their situation grows, and Ma’s resilience reaches its breaking point, they enact a risky plan to escape, ultimately bringing them face-to-face with what may turn out to be the scariest thing yet: the real world.

Based on the novel of the same name by Emma Donoghue, ‘Room’ is a challenging, unsettling, harrowing film, that leaves you disturbed. But that is its sheer power. The Incredible Performances only add to the film’s hefty nature.

‘Room’ Synopsis: After five-year-old Jack and his mother escape from the enclosed surroundings that Jack has known his entire life, the boy makes a thrilling discovery: the outside world.

‘Room’ is a disturbing story about bad things that happen to good people. But its also about hope & fighting back. Its shocking to see the protagonist, a child, discover the world along-with his brave mother, who survived a harrowing experience. I was engrossed & often disturbed by the narrative, especially after the son & mother escape. The series of events that follow are so gut-wrenching, I almost broke down.

‘Room’ is masterfully penned by Emma Donoghue herself. The Writing is consistently powerful & the dialogue are realistic to the core. Lenny Abrahamson’s Direction is first-class. He has handled this dramatic, unsettling tale with complete flourish. Cinematography is perfectly claustrophobic. Editing is razor-crisp. Art Design is skilfully done.

On the whole, ‘Room’ is a must watch! Its certainly unsettling, but its power is undeniable. 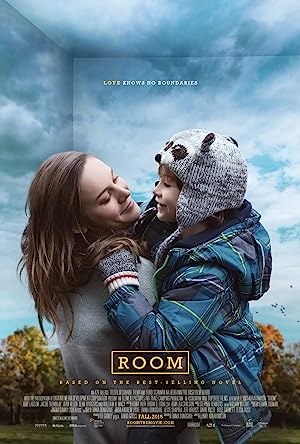 Room (2015)
118 min|Drama, Thriller|22 Jan 2016
8.2Rating: 8.2 / 10 from 311,839 users
Held captive for 7 years in an enclosed space, a woman and her young son finally gain their freedom, allowing the boy to experience the outside world for the first time.
Director: Lenny Abrahamson
Creator: Emma Donoghue (screenplay by), Emma Donoghue (based on the novel by)
Actors: Brie Larson, Jacob Tremblay, Sean Bridgers, Wendy Crewson

Be the first to review “Room 2015” Cancel reply