It’s the 1953/54 school year at St. Magnus Catholic School in Hamilton, Ontario. Fourteen year old Ralph Walker is in many ways a typical teenager. He is experimenting with smoking and is openly preoccupied with the opposite sex, which makes him the brunt of jokes amongst his male classmates and which constantly gets him into trouble with the school’s strict headmaster, Father Fitzpatrick. As penance and to redirect his energies, Father Fitzpatrick orders Ralph to join the school’s cross country running team under the tutelage of the school’s avant-garde thinking teacher, Father Hibbert. Some of the more unusual circumstances of Ralph’s life are that he lives by himself in the family home, telling the authorities that he is living with his paternal grandparents (who are in reality deceased), and telling his widowed hospitalized mother (Ralph’s father was killed in the war) that he is staying with a friend. Ralph’s focus in life changes after his mother falls into a coma. It will take a miracle for her to come out of that coma. After two unrelated and somewhat innocent comments made to Ralph by Father Hibbert on prayer, purity and faith and running the Boston Marathon, Ralph believes that that miracle will be him winning the 1954 Boston Marathon for which he only has 180 days to train. To obtain the necessary physical and spiritual requirements to achieve this goal, Ralph receives some help from his friends Claire Collins and Chester Jones, and from one of the hospital’s compassionate nurses named Alice. Although he believes Ralph’s mission is misguided, Father Hibbert, who has his own secret past running history, becomes Ralph’s personal trainer. These actions place Father Hibbert and Ralph at odds with Father Fitzpatrick, who sees his and other authority figures’ roles as needing to show Ralph his place in life.

My summary should be taken to mean that I am that little boy, or at least I was years ago. I was surprised at how closely I could identify with the lifestyle of Ralph and with his expressions concerning his experiences.

I too grew up in a god-centered universe, one which attempted to impose values for no other apparent reason than short-term control over my actions. I am atheist now, thanks in some part I feel, to that over-bearing presence.

Given the “type” of movie, I can easily say my 10/10 vote reflects a straight forward opinion — I mostly demand consistently portrayed characters, and then simply hope for a good story. But I must admit, that I was partial due to my close association with the experiences of Ralph, a hero! 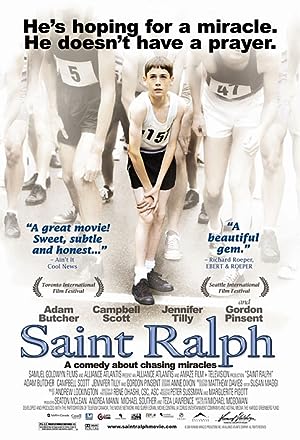 Be the first to review “Saint Ralph 2004” Cancel reply