Siren Phillips has lived her life thinking she’s an ordinary girl, in an ordinary town. On the eve of her twelfth birthday, however, she learns that she is far from ordinary. Destined to turn into a Mermaid at the age of twelve, Siren must struggle with her new reality, saying good bye to her mother and friends, while she transitions into the water. To make matters worse, a group of Hunters are after her, trying to catch her. She soon becomes friends with Adam Wilts, a new boy at school, who she turns to for help. He agrees to help her, but finds himself caught in the middle, when it’s his own father who is after Siren. When Siren’s mother is taken, the town must rally behind her, and help her make a peaceful transition into the water, before the hunters can find out where she is.

This was a wonderful movie about growing up, dealing with changes in life and becoming aware of how the world really can be as we begin the journey of leaving childhood and how we are forced to rapidly mature to deal with what life throws at us when we have no choice but to survive. All of this wrapped up by the whimsical fantasy that Mermaids live among us, set against a beautiful coastal town backdrop.

I was lucky enough to attend the screening of “Scales: Mermaids Are Real” at the Newport Beach Film Festival. I wasn’t quite sure what to expect, especially as this movie is targeted to a younger audience, but I came away feeling that I truly enjoyed the movie. There was never a dull moment, the writing was fantastic, the lead Emmy Perry delivered a flawless natural performance and the entire ensemble was perfectly cast for their roles and did a great job.

The cinematography was incredible, it provided some stunning imagery on the screen, some wonderful locations and a gradual shift from the warm coastal scenery to the colder, more daunting side of town and the inhabitants living there. I wholeheartedly recommend this for all the family, I really think this is a true gem of a movie. 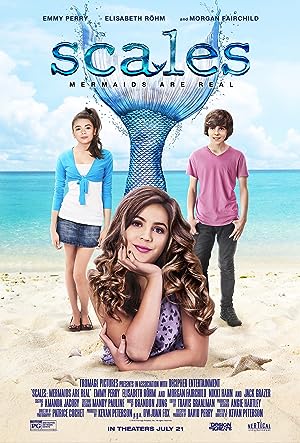 Scales: A Mermaids Tale (2017)
92 min|Adventure, Family, Fantasy|21 Jul 2017
4.8Rating: 4.8 / 10 from 329 users
Siren Phillips has lived her life thinking she's an ordinary girl, in an ordinary town. On the eve of her twelfth birthday, however, she learns that she is far from ordinary. Destined to …
Director: Kevan Peterson
Creator: Kevan Peterson
Actors: Emmy Perry, Elisabeth Röhm, Morgan Fairchild, Jack Dylan Grazer

Be the first to review “Scales: Mermaids Are Real 2017” Cancel reply