A contemporary sexual education guide has been published by the Christian Young Men’s Association of Hamburg to help boys and girls understand and enjoy a healthy sex life. But the question is, can young people of today act responsibly when granted this kind of freedom?

Scene 1: 14 year-old Edith Grossmann (Sonja Spitzweg) is being gang-raped in the girls’ restroom when the school janitor walks in. She soon discovers that it was all a set-up to blackmail her into prostitution. Only when she attempts suicide does the lurid business come to light, resulting in the janitor’s arrest.

Scene 2: Teacher Johannes Holbach uses ‘unorthodox’ methods to engage his pupils’ interest — leading to the seduction of two dozen girls. When he’s exposed, his victims, including 16 year-old Gisela Mohndorf and Micki Henkels (Birgit Tetzlaff), are reluctant to testify. Nevertheless, he gets nearly 6 years.

Scene 3: 14 year-old Ingrid (Manuela Widman) watches her older sister Hilde have sex, which awakens her own latent sexuality. First, she masturbates for the first time, and then explores the differences in the sexes with her 10 year-old cousin — until her father catches them!

Scene 4: Renate’s (Karin Götz) mother is hospitalized, and she comes home early to find her father getting it off with Aunt Lohnie. He explains to his distraught daughter that a mature man simply needs physical love. Naturally, Renate concludes the only way to save her parents’ marriage is to give dad what he needs.

Scene 5: Helmi Kortmann (Carmen Jäckel) is a latter-day Lolita who preys on older men. Her target in this case is Dr. Schneider, father of one of her classmates. He falls under her spell, and a torrid affair ensues — until his jilted son Rolf rats them out to Helmi’s parents. Helmi, of course, claims she was raped, and the hapless Doctor takes the fall.

Scene 6: Margot is an emancipated feminist who thinks she’s in control of the men she targets — such as Werner, the mechanic. But he turns the tables on her, making her so dependent that she is unable to end their abusive relationship.

Scene 7: The janitor’s daughter, Elfi Meier (Ingeborg Steinbach), is looking for a place to get it on with her hopeless date, and they end up in the principal’s office at school — unaware that it was already being used by the principal and his secretary for some late-night nooky. Nor does it help that the principal’s suspicious wife is trying to hunt him down — with the aid of Elfis father!

Scene 8: 14 year-old Karla and her boyfriend Heinz are having fun at the fair, unaware they’re being stalked by a mad killer. He snuffs poor Heinz, then kidnaps and rapes Karla.

Scene 9: Beate Kemper’s (Claudia Höll) wealthy father is opposed to her relationship with Peter Baumgartner, an employee’s son, and forbids their seeing one another. Beate runs away to join Peter in Munich, leaving a note stating their intention to commit suicide together. The two fathers race to Munich, hoping to arrive in time… 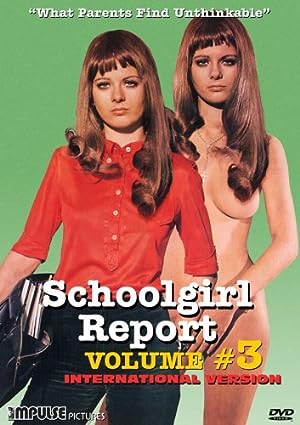