Home » Foreign Movies without Subtitles » Karlsson on the Roof 1974

Karlsson is a very short, very portly and overconfident man who lives in a small house hidden behind a chimney on the roof of a very ordinary apartment building, on a very ordinary street in Stockholm. When Karlsson pushes a button on his stomach, it starts a clever little motor with a propeller on his back allowing him to fly. Karlsson is the best at everything, at least according to himself. But there is, in fact, one thing at which he excels: being a playmate to a young boy named Svante, but nicknamed Lillebror (little brother), who lives in the apartment building with his family. Karlsson is quite mischievous, often getting Lillebror in trouble, but everyone in the end – even Lillebror’s family, his cranky uncle, and their dour housekeeper – grow to like Karlsson and appreciate his sense of humour, energy, and good nature.

What’s the secret to making of making great stories for children that not only stand the test of time, but stay with the target-audience long after they’ve hit puberty? In my humble opinion it’s not trying to patronize the kids or treating them like childish buffoons like so many contemporary children’s movies and shows do. Perhaps with the exception of Michael Ende (“The Neverending Story”), few authors have understood that as well as Sweden’s Astrid Lindgren. The way Lindgren saw it, kids weren’t just little idiots (pardon the expression) waiting to grow up, but rather small adults, who just conceive the world through their own eyes. Evidence to that are countless classics, “Pippi Longstockings” being just the most famous ones, but “Michel from Lönneberga”, “Ronia the Robber’s Daughter” or (my personal favorite), the often gloomy yet beautiful “Brothers Lionheart”.

But let’s take a look at “Karlsson on the roof” (this being the title in Germany; the original title roughly translating to “The world’s best Karlsson”, played by Mats Wikström) through the adult eye: Karlsson is rude, obnoxious, selfish, lawless to the point of being an anarchist, completely irresponsible and so full of himself that one fears, he might spill himself from his own head. He may be, what he actor is – a ten-year-old with an early tendency for male-baldness – though the novel describes him as a short, overweight man, making the figure even more “creepy” (for the lack of a better word). He lives in a drab, working-class neighborhood of Stockholm, in a house on top of the city which seems only accessible through the air. Conveniently, since Karlsson has a little propeller on his back, with which he generally flies around. This caters to the idea that Karlsson is merely the “invisible friend” or figment of imagination of little Lillebror (Lars Söderdahl), an average kid from the neighborhood, and Karlsson’s best and only friend.

Whereby, calling Karlsson a “friend” is a bit of a stretch: he generally treats the well-mannered, innocent Lillebror as something like a retarded pet, gets him in trouble with his often mischievous pranks, mooches off him (usually for candy but occasionally off his pocket-money), destroys Lillebror’s toys and makes it very clear that he, Karlsson, knows everything better, is the best at everything conceivable. Karlsson keeps reminding Lillebror that Lillebror is just “a stupid, little boy”. And, whenever Karlsson plays one of his pranks, he conveniently disappears into thin air, leave Lillebror behind to take the brunt of his furious family. In short: Karlsson is a character that one would wish to toss out the window, if it weren’t for the fact that he can fly anyhow.

But that’s just the adult’s perspective and that’s not the perspective through which the story is told. For a kid, Karlsson is the ideal figure: completely care-free, not bound by any rules, responsibilities or regulations, he may eat as much candy as he pleases and has nobody that tells him to go to bed at a certain hour. And if he feels like flying a few rounds over the city at any given time, well, so be it. Despite his often demeaning attitude, he is somewhat of a bigger brother and the person that Lillebror secretly would like to be. Karlsson on the other hand, despite his obvious personality flaws, is a soft hand inside a rough glove, who longs for what Lillebror has: the security of a family that he himself obviously doesn’t have. Despite being obnoxious and offensive (not to mention, physically sometimes resembling the demon from “The Exorcist”), Karlsson is a figure that adults would loath, but that most male boys would aspire to be. A wonderful by both actors, who are by no means professionals (Karlsson would remain Wikström only role in the movie and a following mini-series; he’d go on to become a security personnel, while Söderdahl, after playing a somewhat similar role in “Brothers Lionheart” quit acting, became a missionary in South-America and today works as a postal worker).

Has the show stood the test of time? Difficult to say. Perhaps “Karlsson on the Roof” was one of those cases where you had to have been there to get it and perhaps younger viewers these days might wonder, what the fuss about a kid that had his own little house on top of a city was all about, considering that Karlsson had neither internet-connection nor a play-station up there. But for people from my generation the show remains childhood magic and you’d be hard-pressed to find any, who cannot whistle the theme. Which is another interesting tit-bit: while the original soundtrack seemed to have gone more in the direction of folk music, the German version had a rather catchy, bubble-bass-Funk-music as the intro and outro. Occasionally people would quip that this music would have had a better place in a 70’s porn-production, but then again, what did my generation know about porn 30-odd years ago? 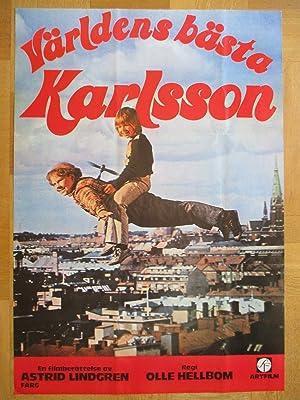