Eli McAllister, our eleven-year-old hero, is on a quest. He is also setting out to win The Fiesta Cup, a local bowling tournament. Joining him is his famous fashion designer uncle, Sean McAllister (Adrian Grenier.) Sean hasn’t spent time with his family – specifically his father – for years. But now he has come home to spend time with his older brother, Eli’s father. Thrown into the tournament as his ailing brother’s substitute, Sean clashes with his father as old wounds are opened. But instead of reliving the past, they pull together to bowl their best for Eli who stands to lose so much. Funny, sweet and soulful – SEX, DEATH AND BOWLING takes us on a journey to learn that the secret to life is loving what you have – even if it is just a split.

Eli McAllister (Joshua Rush) is the 11-year-old narrator of this family drama written and directed by Ally Walker. His father Rick (Bailey Chase) is in a hospital nearing death from cancer. The boy is fascinated by speculations about the afterlife. At one point, he wants to become a Catholic because purgatory makes good sense as a place for people who aren’t good enough for heaven or bad enough for hell. Later this precocious boy makes contact with a guru and takes to heart his teachings about karma and reincarnation.Sean (Adrian Grenier) is Rick’s brother and the gay son of Dick McCallister (Daniel Hugh Kelly) who runs a local sports shop and is organizer of the bowling club. His father’s disapproval of his homosexuality has kept him away for six years. Family tensions rise to the surface when he comes to town. He is a famous fashion designer who was recently profiled in a cover story on GQ. During his visit, Sean recalls the closeness to his brother who always took his side and rescued him from bullies. Now Eli is experiencing the same persecution because of his sensitive nature.The boy is determined to win a bowling tournament as a gift for his dying father. When two members of the team cannot play, Sean and a black man replace them. Meanwhile, at the hospital Eli’s mother (Selma Blair) grows impatient with a nurse (Drea de Matteo) whom she feels is over-medicating Rick and ruining the few intimate moments he has left with his family and friends.

Sex, Death and Bowling is an apt title for this richly emotional character-driven drama that takes within its broad embrace death, the burdens of grief, familial wounds, sports, homosexuality, and bullying. 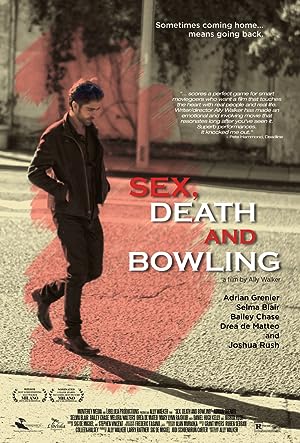 Be the first to review “Sex, Death and Bowling 2015” Cancel reply