SHARED ROOMS explores the meaning of home and family through three interrelated stories of gay men finding connections during the week between Christmas and New Year’s Day – a married couple who take in a teenage relative who was kicked out of his home after his parents discovered he was gay; a pair of roommates forced to share a bed for the week, much to the delight (and horror) of the one harboring a secret crush on the other; and two men looking for a quick hookup who end up finding a much stronger connection.

The chemistry between the actors ties this film together and leads to fluid dialogue, which felt like it was delivered quite naturally. The cast seemed to have been chosen deliberately.

While I laughed a lot in this movie, I left the theater feeling connected, in some way, to each of the characters. There were quite a few one-liners, which didn’t seem forced. At times, the plot seemed like it could spin off into a television series.

Despite the lightheartedness, there was always a string, or maybe lots of strings, of emotional struggle woven in the narrative, which grounded the film and makes it relevant. 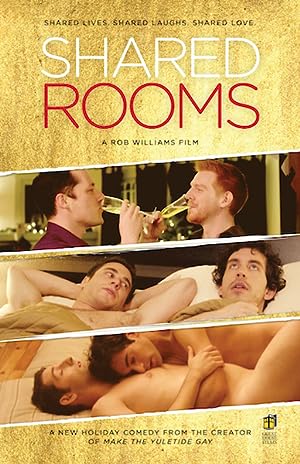 Be the first to review “Shared Rooms 2016” Cancel reply