Numerous New York City dwellers come to the exclusive club Shortbus to work out problems in their sexual relationships. Rob and Sophia are a happily married couple, except for the fact that she has never experienced sexual climax. This irony follows her to work because she is a couples counselor who frequently has to deal with the sexual issues other couples have. Two of her patients are Jamie and James, a gay couple who have been monogamous for five years and counting. James wants to bring other men in to the relationship, and his own history with depression may hint at an ulterior motive. Ceth (pronounced Seth) may be the perfect addition to their family, but Caleb, a voyeur from across the street, may have his own ideas about that. Sophia visits Severin, a dominatrix with secrets of her own to reveal.

As we progress through the film we see the lives of a small group of New Yorkers grow as they develop their relationships or indeed the quest for a relationship. The medium for bringing these lives together is the “Shortbus” club. A rather carnal club which they all drawn to becomes a focus for their development. Each confronts their own particular daemons. As heavy as this sounds, it is quite a light hearted film. The closing scenes are fantastic. As you watch this film you will feel yourself being dragged in, until the end when u feel almost as if you are part of it.

A great movie, one which should become a cult classic (only because it might be a bit too “graphic” for mainstream cinemas, but certainly a classic. Any attempt to sanitize and edit it would surely destroy the film.

This movie will make you laugh, cry and sing; you will leave the movie theatre affected by this film. 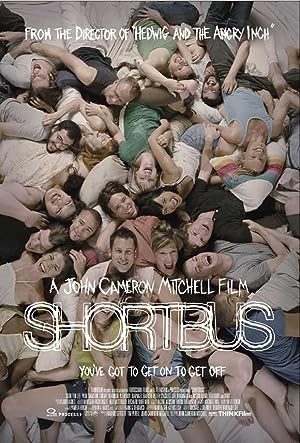