Andrzej and Michal are two young teenagers who come together every summer in the small tourist village Siemiany on the countryside. Their friendship has grown into years of great memories. And the boredom of the countryside and the feeling of unity amongst the boys, takes their friendship to a new level of sexually loaded intimacy.

With good intentions, you will not save it. ‘Siemiany’ looks like the Polish ‘Kids’ but remains hanging in beautiful images, which unfortunately again dive out of our brain.

Siemiany is some hole in Poland where two friends grow up. They kill the time catching fish, getting some dolls and running along with the local gang. And passant dives the first sexual feelings. And those seem to drive a wedge between the two boys. A lot of explanation about the characters does not direct the director to us. What about the parents, for example? Or is this short film an explicit blow to them because they fail in their educational duties? In any case, Philip James McGoldrick wants to report something about youngsters who are left to their fate and slid down quietly. With this last thing, it still matters. Ghetto-like states are not discussed in this rural town, despite the fact that one of the gang members has a weapon. McGoldrick observes and lets some characters spit their bile into the camera, which sometimes gives us a docu effect. Despite the sympathy for the two guests, their fights could not really cope with us. We were expecting every moment Ciske de Rat, who chased a tree from his back. Fortunately, ‘Siemiany’ is not sung. Despite the beautiful scenes and youthful enthusiasm of the cast, ‘Siemiany’ remains a visible non-dialect. 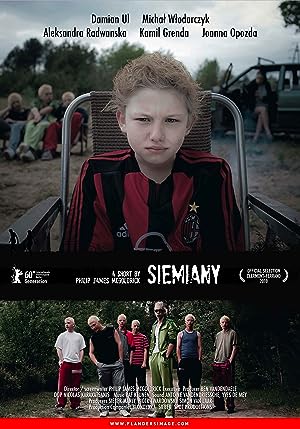 Be the first to review “Siemiany 2009” Cancel reply