In the town of Thiers, summer of 1976, teachers and parents give their children skills, love, and attention. A teacher has his first child, a single mother hopes to meet Mr. Right, another mom reaches out to Patrick, a motherless lad who is just discovering the opposite sex. Patrick befriends Julien, a new student who lives in poverty with his mother and has a terrible secret. Bruno shows his friends how to chat up girls. Sylvie stages a witty protest against her parents. Brothers give a friend a haircut. A toddler falls from a window and is unhurt. Everybody goes to the cinema. At camp, Martine catches Patrick’s eye. A teacher explains: “Life is hard, but it’s wonderful.”

When this film was released,one French critic,Gilles Colpart wrote that TRuffaut did better when he focused on a main character,Antoine Doinel,for instance.At least here,we do not have to stand Jean-Pierre Léaud’s mannerism.The people who watch Léaud’s movies dubbed in English cannot imagine how lucky they are.Gone is Léaud,gone is Truffaut’s sometimes smugness and pretension.Here we find what Truffaut does best:a movie about children played by children (he had brilliantly succeeded in the very hard task of bringing Victor the “wild child” to the screen)A lot of humor (a quality that is not generally Truffaut’s forte),a lot of plots and subplots masterfully intertwined,no stars ,and a lot of spontaneity too.These vignettes are often delightful:the reluctant student declaiming Molière,the girl who “has already slept with a boy”(What did he do when you were in bed?her best friend asks-Oh,he read a comic strip, was the answer),the boy who says to his friend’s mother “thanks for this frugal meal” after having swallowed a whole lot of food.But Truffaut,present in the movie through the schoolteacher character,does not give up more serious topics:here mistreated children.After he discovered one of his pupils suffered such physical cruelty,the schoolteacher explains this problem to his school mates with delicacy and intelligence,as if they were adults.Don’t miss this simple,yet heart-warming movie. 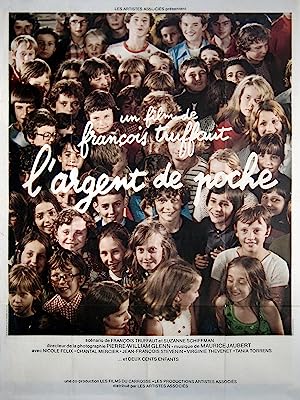