Three teenage brothers, gang-member Bobby, troubled mama’s boy Alan and self-assured prankster Lex, reside in a downtrodden section of Glasgow, Scotland, circa 1968. But while Bobby and Alan are beginning to experience the power of raging hormones, the story focuses on Lex, who begins a downward spiral after he accidentally shoots the leader of Bobby’s gang. Lex’s cockiness and immaturity unfortunately prevent him from understanding the effect his subsequent crimes will have on both himself, and on those around him.

The gifted Scottish director Gillies MacKinnon made this wonderfully fresh film about growing up in Glasgow in the late sixties and which he co-wrote with his brother Billy. It has the same feel for time and place and what it’s like to be a teenager in a slightly idealized, hyper-realist past but it’s an altogether more kinetic work full of great visual flourishes.

It centres on the three Maclean brothers, the deeply troubled, almost psychopathic Bobby who is a member of one of two rival gangs, (J S Duffy), Adam who is a talented artist hoping to go to Art School, (Joe McFadden) and the youngest Lex, who like Adam also has a talent for art but who also fosters some of Bobby’s rebellious spirit (Iain Robertson). When Lex accidentally shoots a member of the rival gang in the eye, the boys find themselves caught up, in an almost surrealist fashion, in the conflict which turns very nasty indeed. MacKinnon may be dealing with such conventional issues as gang warfare but he treats the material in ways movies haven’t done before. Adults, such as the boy’s mother, (beautifully played by Clare Higgins), remain very much on the fringe.

This is a violent, darkly funny but mostly tragic film and the performances from the mostly young cast are extraordinary, in particular from J S Duffy and Iain Robertson and from Garry Sweeney as the vicious leader of Bobby’s gang. The film wasn’t widely circulated or seen and consequently was not a commercial success yet it remains one of the key British films of the past 10 years. 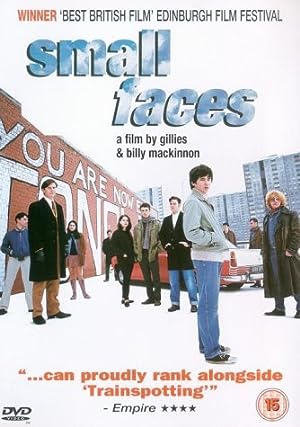