Smiley Greevins is a cheeky, mischievous, imaginative little boy who lives in the small town of Murrumbilla in the Australian outback. His father Bill is a poor drover who is often away from home. Much to the exasperation of his overworked wife, Ma Greevins, Bill is also very fond of the drink. Smiley is determined to buy himself a push bike, and so he takes on odd jobs in an effort to save up enough money. But Smiley always seems to get caught up in some sort of misadventure. Smiley is a classic Australian film that will delight audiences of all ages.

For me watching Smiley is another chance to see that quintessential Aussie Chips Rafferty playing a police sergeant on bicycle patrol. But for the rest especially those under 12 Smiley is a very nice and heartwarming children’s feature about a kid growing up in the outback with hardworking mother and a father who’s a drover and not exactly the best role model around.

Colin Petersen plays young Smiley and that’s his baptismal name all right and together with friend Bruce Archer have a real Tom and Huck kind of childhood on the outback. Both despise footwear of any kind and they’re getting into all kinds of mischief including the fact that young Smiley gets himself quite innocently involved in the opium trade as a ruthless villain uses the kid as a drug mule. How low can you get?

Rafferty is always good and he’s more the role model than real father Reg Lye ever could be. As for Petersen this is all to earn money to get himself a bicycle.

As others have said the film is dated, but Smiley has not lost a tad of genuine appeal. 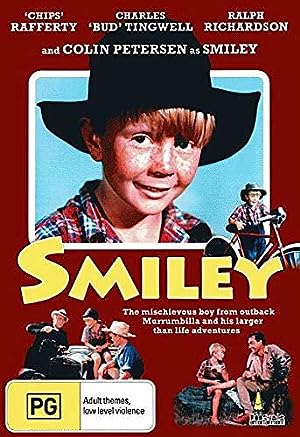