Inspired by true events, SOLOS explores relationships among three individuals who are struggling to open up their feelings towards each other. Filmmakers Kan Lume and Loo Zihan co-directed this pathos that dramatizes the selfishness of love and its tragic outcomes. Set in contemporary Singapore, SOLOS follows the endeavors of BOY, MAN and MOTHER. Having been in a relationship with MAN (Lim Yu Beng) for years, BOY (Loo Zihan) eventually grows up and wishes to quit the relationship. Conversely, MAN still wants to be with BOY and for them to settle together. Meanwhile, MOTHER (Goh Guat Kian) is devastated that her son (BOY) has abandoned her and has been in relationship with MAN. As the three characters fight their own demons, SOLOS juxtaposes reality and surreal scenes in order to give clues of each character’s inner desires. The film has minimum conversation to give freedom to the audience individual interpretation of the film

There is no dialogue but once you see what HD looks like then there is no turning back – it is definitely the future of film (bye bye film).

Unfortunately, the film itself is a stunning artsy-fartsy piece of crap…but, God, it really does look good.

Banned and/or cut to shreds in its native Singapore – not because of the gay sex scenes but because it was an overly long drawn out waste of time.

The censors were just trying to save some of the audience’s time. 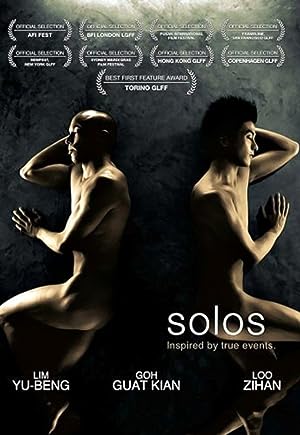 Be the first to review “Solos 2007” Cancel reply