When one-eyed high school senior Matt falls meets 250 lb Jill, he falls more in love than he ever thought possible. However, when graduation comes and Jill moves cross-country to go to college, she then loses over 50 lbs – much to Matt’s surprise when he arrives to visit her. While Matt struggles to accept Jill’s new body, Jill begins to question whether Matt is really the man she wants to date. As the distance widens between them, the characters are propelled onto a collision course with brutality and loss, forcing them to confront who they are, who they were, and who everyone thinks they’re supposed to be.

Though it is primarily an off-beat romantic comedy, there is a strong theme of dark yet hopeful commentary on how relationships work in America’s current social state. I have heard time and time again, as you probably have, that love has the power to win the day and overcome all things. While that is true, it does not mean that love will win the day every time or even the majority of the time. This isn’t the first on-screen relationship to address how complex being in love with someone can be because of all of the outside factors that play into both parties’ lives.

Now, I don’t watch a lot of romantic movies and even less romantic comedies, but this film felt original to me. It didn’t seem to degenerate into the usual tropes that I’ve heard most rom-com’s fall into and had its own unique style. I was fortunate enough to have an audience Q and A with the director and several of the actors after seeing this at the Rhode Island Film Festival in August. The director, Ian MacAllister McDonald, said that one of his main objectives with this story was to create a love story for types of people who don’t typically get their own love stories. For this reason, I hope that this gets a broad theatrical release at some point, because a love story about “unattractive” people is exactly what Hollywood needs right now.

Beyond just the social commentary aspect, it’s quite enjoyable to watch. The whole audience had tangible reactions to the couple of very awkward and uncomfortable scenes. The scattered humorous bits were pretty spot on, as well and got some good laughs from the audience. The acting was also quite solid, especially considering that the actors are largely unknown. The dialogue felt very realistic, even though the script as a whole was not fabulous.

If this comes to your local film festival, I would recommend that you at least consider seeing this as opposed to whatever else is showing at the time. Since you probably won’t be provided with MPAA ratings at any given festival, I can safely say that this would be rated R were it broadly released. Even if this is not showing, go check out the film festivals near you. It’s a great opportunity to see some movies that, while they may not have big- name actors or awesome visual effects, are nonetheless good and cannot be found anywhere else. 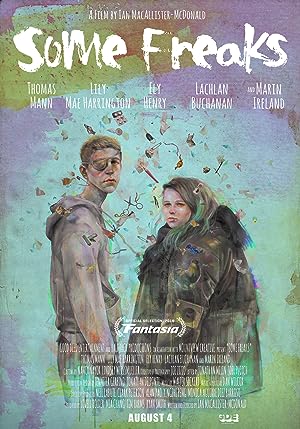 Some Freaks (2016)
97 min|Comedy, Drama, Romance|04 Aug 2017
6.3Rating: 6.3 / 10 from 1,520 users
A charming romance develops between a boy with one eye and an overweight girl, though when she loses her weight after going to college, their relationship is tested in devastating ways they never dreamed would happen.
Director: Ian MacAllister McDonald
Creator: Ian MacAllister McDonald
Actors: Thomas Mann, Marin Ireland, Lachlan Buchanan, Lily Mae Harrington

Be the first to review “Some Freaks 2016” Cancel reply