Someday This Pain Will Be Useful to You 2011

James Sveck is a lonely youth in the summer before he goes off to college at Brown University. Apart from hanging with his grandmother, James prefers solitude. The story is told in first person narration, which helps give an intimate inside view of James as he works through his life at the therapy sessions which his parents insist he goes to. We learn about James’s past and present through the stories he tells.

This movie kind of reminds me of The Art of Getting By, but the main character was not as likable or accessible. Most of the time, I though he was annoying and affected. Many of the scenes rang false and the accompanying dialogue seemed to be written by a first-year psychologist student. However, the saving grace is the second-half of the film. Once the life-coach aspect comes into play, the movie improves dramatically. The main character’s scenes with Lucy Lu felt real and not like the psycho-analysis that permeated the first-half of the movie. I really enjoyed the scenes in Washington and they really captured the claustrophobic feeling of the main character. Finally seeing what happened made the main character more sympathetic and less insufferable. Decent film 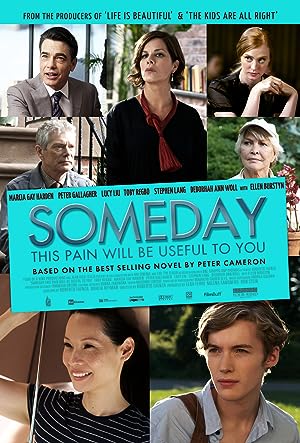 Someday This Pain Will Be Useful to You (2011)
95 min|Drama|05 Oct 2012
5.8Rating: 5.8 / 10 from 2,397 users
A vulnerable teenager with a deep perception of the world and no idea how to live in it.
Director: Roberto Faenza
Creator: Peter Cameron (based on the novel by), Roberto Faenza, Dahlia Heyman
Actors: Toby Regbo, Marcia Gay Harden, Peter Gallagher, Lucy Liu