Tobi and Achim, the pride of the local crew club, have been the best of friends for years and are convinced that nothing will ever stand in the way of their friendship. They look forward to the upcoming summer camp and the crew competition. Achim’s girlfriend Sandra is on the girl’s team and he enjoys spending more time with her. Tobi becomes increasingly skeptical of their relationship. Anke, the pretty girl who has fallen for Tobi, doesn’t make things any easier, then the gay team from Berlin arrives and Tobi is totally confused. The storm that breaks out the evening before the race begins is more than meteorological in this sensitive story about the complexities of growing up.

Summer Storm is a remarkably sensitive and entertaining film, a drama about sexual orientation with stellar acting, plenty of comic relief, and the touching moments that make this movie worth a second or third visit. Within minutes, I was captivated by the main characters, reliving my own doubts in those beautiful days between high school and reality.

Those looking for an erotic homosexual expose of yet another ”coming out” will probably be disappointed. The interaction of the sexes is both subtle and natural, damn normal, as it should be. Few films let you forget your own sexual orientation and draw you into the scene through the sheer power of love and affection. The tears, joys and pain of youth are vividly painted on a backdrop of beautifully photographed scenes that are both authentically modern and nostalgically overpowering. These are the friends you want to meet on your next canoe trip or wished you had met at summer camp 40 years ago.

Summer Storm is perhaps the best German film in decades, a quiet film that steals your heart. American audiences have had to wait a bit longer to finally see it. In Germany, the film was rated PG-12. The US version is rated R. That says something about the progress (or lack of) in dealing with films that address sexuality. US audiences can deal with ”Sex and the City” and ”Six Feet Under” but don’t dare let our kids see a movie that might help them find their sexual identity. Personally, I can’t think of a better film as an introduction to sex education, in grade school. I highly recommend watching the film with your teen-aged son or daughter. They can explain the parts you didn’t quite catch. 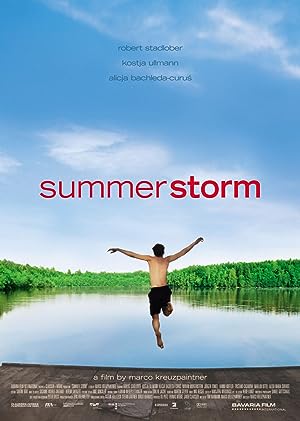 1 review for Sommersturm 2004 with English Subtitles