SON OF RAMBOW is the name of the home movie made by two little boys with a big video camera and even bigger ambitions. Set on a long English summer in the early ’80s, SON OF RAMBOW is a comedy about friendship, faith and the tough business of growing up. We see the story through the eyes of Will, the eldest son of a fatherless Plymouth Brethren family. The Brethren regard themselves as God’s ‘chosen ones’ and their strict moral code means that Will has never been allowed to mix with the other ‘worldlies,’ listen to music or watch TV, until he finds himself caught up in the extraordinary world of Lee Carter, the school terror and maker of bizarre home movies. Carter exposes Will to a pirate copy of Rambo: First Blood and from that moment Will’s mind is blown wide open and he’s easily convinced to be the stuntman in Lee Carters’ diabolical home movie. Will’s imaginative little brain is not only given chance to flourish in the world of film making, but is also very handy when it comes to dreaming up elaborate schemes to keep his partnership with Lee Carter a secret from the Brethren community. Will and Carter’s complete disregard for consequences and innocent ambition means that the process of making their film is a glorious roller-coaster that eventually leads to true friendship. They start to make a name for themselves at school as movie makers but when popularity descends on them in the form of the Pied Piper-esque French exchange student, Didier Revol, their unique friendship and their precious film are pushed, quite literally, to breaking point.

Greetings again from the darkness. The Sundance favorite is finally making the rounds and I found this to be a very entertaining and charming film, despite its relative simplicity.

A semi-autobiographical piece from writer/director Garth Jennings (“The Hitchhiker’s Guide to the Galaxy”), the film focuses on the escapades of two young boys making a movie. Along the way, many topics are addressed … family, religion, friendship, loyalty, idol-worship, etc.

Bill Milner (as Will Proudfoot) and Will Poulter (as Lee Carter) are the newcomers who play the boys. Poulter is a near reincarnation of River Phoenix as Chris Chambers (“Stand By Me”) as he carries so much bottled up emotion stemming from his longing for attention. Milner’s character is the more sensitive, creative type being suffocated by his family’s religion. Quite a pair.

As a commentary on film and celebrity, the two boy’s world is rocked when their film-making is discovered. Now everyone wants a piece including the French exchange student, Didier, played hysterically well by Jules Sitruk. Character issues to follow!

The boys are so endearing that most kids would enjoy the film and certainly most adults who were still growing up in the 80’s will get a kick out of it. 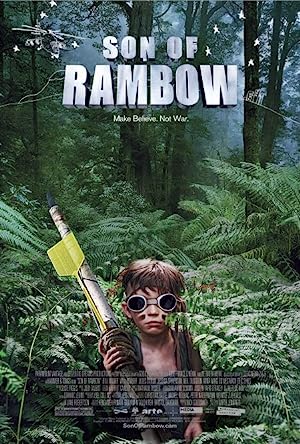 Be the first to review “Son of Rambow 2007” Cancel reply