Ty, Hector, and Bao are close friends in a tough section of Boston, where they’re called “the PG-13 crew.” They’re 14, decent kids with few skills who’ve bailed out of school. A small gang of older tough guys, led by Marcus and Tommy, menace them, and when the PG-13s fight back and rob one of the gang, Marcus and Tommy vow to kill them. They seek protection from Derick, a drug dealer, who agrees to help if they’ll sell drugs. Meanwhile, Ty is recruited to work at a community center by J.J., its quiet leader. Ty and his friends are in a squeeze: surrounded by violence, drugs, and no opportunities, is there any way out?

“Squeeze” presents strong characters, good writing and photography. The film setting is not unlike most urban ghettos, and the situations are true to life. The story is real and it reminds me of some young people who are smart in school, but decided to drop out for lack of interest. Each of the young males, ages 14-15, had to assume leadership roles in their families trying to support their mothers. Unfortunately, they sought the wrong avenues, finding themselves caught up in a game spinning out of control. They were forced to seek shelter in a community based program by day, and a life of crime by night. The three found themselves in a squeeze-play. Squeeze” is thought-provoking and the theme is reoccurring in today’s society, which is why I recommend people to see it. 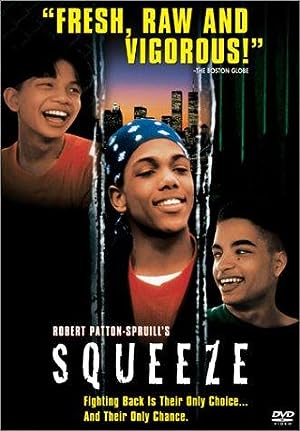