A gang of fifteen-year-old living in the suburbs of Barcelona have specialized in car theft. With that cars they are engaged in giving the “pull”, storming shops to sell goods and attack couples in secluded places in order to rob them and abuse women. Sometimes caught red-handed, they are persecuted by the police; To escape, they invade the road, circulate in the opposite direction and skip controls, sometimes resulting badly injured.

Perros Callejeros is based on the juvenile delinquence of the 1970`s and 80`s in Spain. The story is set in `Barrio de la Mina` in Barcelona one of the most conflict neighbourhoods in Spain. The charectars chosen were real juvenile delinquents all with criminal records, which the director used to give the film a realistic touch,and maybe to give them the chance to change, but unfortunately non of them live today.

This film is very powerful and dramatic, it shows how these kids were brought up to survive on the streets, and how life mistreated them because they were poor!

The movie is very realisticly made and has a strong content of the Marginated life in Spain. Something that everyone seems to ignore when they have no direct relation with. It is full of realistic action and suspence. Car thefts, Car chases, Bag Snatchers, Armed robberies, Sex and a soundtrack that comes straightout of this world – `Rumba`.

Angel Fernandez Franco, `El Torete` was one of the most famous deliquents of that time, which the director `Jose Antonio de la Loma` Contracted him to play himself as he had a natural talent to act. The Success of this film drove `de la Loma` to use `El Torete` for two more films based on his life, which were `Perros Callejeros 2` and `Los Ultimos Golpes del Torete`. Unfortunately when the films were over `El Torete` turned back to his normal life and died at the age of 29, in 1989 victim of H.I.V.

NOT TO BE MISSED AS ITS MORE THAN JUST A MOVIE!

ITS A DOCUMENT OF THE REAL WORLD 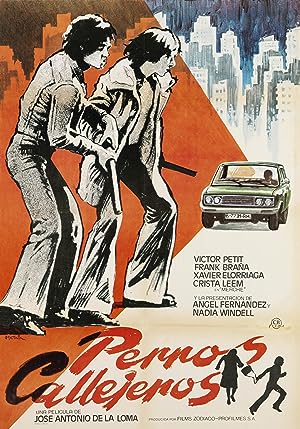 Be the first to review “Street Warriors 1977” Cancel reply