Silent as a painting, the movie shows us day-dreamer Hermie and his friends Oscy and Benjie spending the summer of ’42 on an US island with their parents – rather unaffected by WWII. While Oscy’s main worries are the when and how of getting laid, Hermie honestly falls in love with the older Dorothy, who’s married to an army pilot. When her husband returns to the front, Hermie shyly approaches her.

This movie captivated me beyond my expectations. Not being a movie-goer or a TV-watcher, I had not yet seen (or read about) the movie, its excerpts, the original book, or the cast, although I had heard references to the summer of ’42. After an intense work week, I had tuned into the PBS channel on TV to watch 30 minutes of a business news program, at the end of which, PBS showed that “The Summer of ’42” was next. I thought of watching it only for a few minutes – not really being interested in seeing a story from 62 years ago in a movie made 33 years ago. PBS played the movie without a break, and I sat through all of it – totally captivated. I don’t think I can explain the reasons with a typical technical analysis. I think it held me in a trance, because it reflected my own coming of age. Even though I grew up in a different era, country, culture and society, there were many parallels to the drugstore episode, the furtive readings of the book, the carrying of the grocery bags, the storing away of the boxes, and the attempted “fooling around” inside the movie theater.

I like a production (movie; theater; music) that reflects the reality one experiences in life. This movie was one of those rare productions. I felt it was quite artistic in its balance – the way it assimilated simple elements from everyday living, with a simple, but enchanting, musical score. The movie did not need any dazzling stage effects – Jennifer O’Neill was enough; and, even in her, the art and beauty was in her being so natural.

In the end, I felt good about spending the time to see the movie. 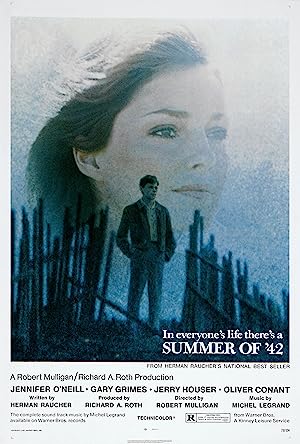