Hank, stranded on a deserted island and about to kill himself, notices a corpse washed up on the beach. He befriends it, naming it Manny, only to discover that his new friend can talk and has a myriad of supernatural abilities…which may help him get home.

This movie was truly beautiful. Don’t get scared of the dead body and farts, stick with it until the end. It contains beautiful scenes of friendship and love and acceptance of all human beings. Really teaches you about a deeper mening about life. The desperation of being unloved and all alone, and the lengths we go to fight it and find some deeper mening in life. It’s not just about action and saving the girl, sometimes you just have to find the one person in life willing to accept you for you. Perfect movie for the society of today, where so many suffer from depression and loneliness that could be cured if someone would just be willing to take the time to accept weirdness.

Its a perfect mixture of humor and seriousness. If you don’t appreciate it, you should probably watch it again. It truly moved my heart. Weirdest best movie I’ve seen. 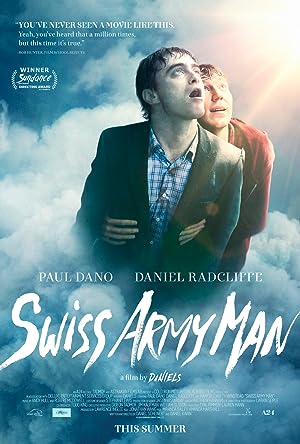 Be the first to review “Swiss Army Man 2016” Cancel reply