The human race is thrown into chaos as an alien invasion takes control of the planet in an effort to find one boy out of 7 billion people who holds the power to destroy them.

Well I have to concur with most reviews here, this is not a great movie which is a shame as I think it could have been. Most people use the term “wooden” when they write about peoples acting ability in certain roles and for the most part, they are not just wooden but petrified. The main character played by a young man, Marco Tolage definitely shows some promise with throwing all his emotions in to the last scenes.

The story is one told since time of fables began, that of a savior in one form or another, just like King Arthur was the savior and even in TV series like Once Upon a time, we have a savior, so classic good vs evil but the threat is from alien’s. It would have been good if the writer could have explored more about the reason for the bad guys rather than some one liner near the end.

For Sc-Fi people, it’s watchable but yes, do not think it will blow your socks off. Children with less movie going experience may like it as the script is short and really, not many people speak more than one line of 5-7 words. 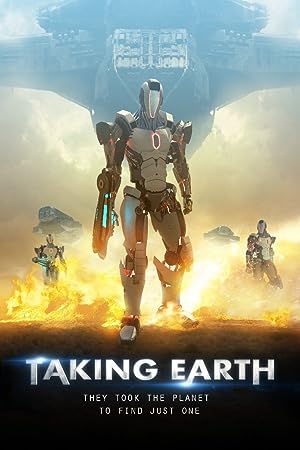 Taking Earth (2017)
100 min|Sci-Fi|17 Mar 2017
2.7Rating: 2.7 / 10 from 928 users
The human race is thrown into chaos as an alien invasion takes control of the planet in an effort to find one boy out of 7 billion people who holds the power to destroy them.
Director: Grant Humphreys
Creator: Michael Harrison, Grant Humphreys, Grant Knight
Actors: Ronan Quarmby, Brad Richards, Barbara Harrison, Marco Torlage

Be the first to review “Taking Earth 2017” Cancel reply