After wandering a ruined city for years in search of food and shelter, two siblings find their way into one of the last remaining buildings. Inside, they find a man who will make them a dangerous offer to survive the outside world.

‘We Are The Flesh’ is set in a post-apocalyptic setting. What kind of disaster has befallen earth this time we do not know; we do get to meet people who’re walking disasters themselves, though. A man and his sister stumble across a vagabond living in an old ruin where he produces alcohol and follows crazy routines. He offers safe refuge on one condition: They must do as he says. Eventually, he even demands the siblings should have sex. When they comply, the vagabond dies from arousal, leaving them free to inhabit the ruin as they wish. At this point, however, they have already been consumed by his insanity…

What is ‘We Are The Flesh’? Over in the discussion forum someone asked other forumites whether they found this movie shocking or boring.

In my opinion it’s both shocking and boring, really. Shockingly boring, too.

About a quarter of an hour into the movie, all plot is thrown overboard here and repetitive metaphors are being injected into this flick like through a clap-stained junkie’s syringe.

Some people might want to sit down, interpret the images they’ve seen and maybe even come up with something; and by “some people” I mean those artsy cheerleaders who’d also pay one million bucks for a canvas splattered with feces because they somehow managed to read a life- changing metaphor into dog poo.

‘We Are The Flesh’ is just crazy. I’m actually sorry for the actors who don’t look like they enjoyed themselves much, especially not during the explicit sex scenes. Those — like nearly everything else in the movie — just do not feel organic, by the way. They’ve been added for shock value obviously and nothing but shock value.

Maybe the actors should’ve eaten the same mushrooms as the director? I must at least assume that the mind responsible for this movie was under influence of some intoxicating substance.

For what else do we have?

Rape, torture, explicit violence, sadism and urine- as well as menstruation-fetishism. Oh my. Please, someone tell those “visionary” movie makers: If you’re unable to narrate the relationship between two protagonists without a minute-long closeup of some dude’s stiff shaft, odds are you’re utterly unable to achieve the same no matter how much explicit imagery you included.

It’s more likely you have just gone out of your league!

Good God. I miss the days when they made subtle, intelligent movies which were confident that I would understand what was going on without hammering home a point that I had understood an hour ago. Movies where e.g. the director managed to transport the tragedy of a death without smearing brain fluid and skull fragments all over the camera lens; movies where it didn’t take pornography to prove emotional attachment.

[ At this point I must reiterate: It’s not the explicit imagery which bothered me. ‘Blue Is The Warmest Color’ for example was a grand movie regardless of its many explicit sex scenes. There, they used to be warranted and had the merit of portraying a young woman’s sexual liberation. They weren’t voyeuristic. However, this movie’s voyeurism is off the charts!]

I’m sorry, but I don’t really understand how ‘We Are The Flesh’ is supposed to be art. The word ‘art’ comes from Latin “ars”, meaning “skilfulness”. Screaming when whispering would suffice does not denote skills. Using an artist’s means does not make anyone an artist.

I was about to wonder why it is that these days we can’t have anything in between Michael Bay and this Emiliano Rocha Minter anymore – but there is no meaningful distinction to set them apart. One uses a gigaton of fake explosives in order to create “suspense”, the other uses a gigaton of actual ejaculate.

It seems as though indie movies had become another shade of mainstream cinema while I was not paying attention. 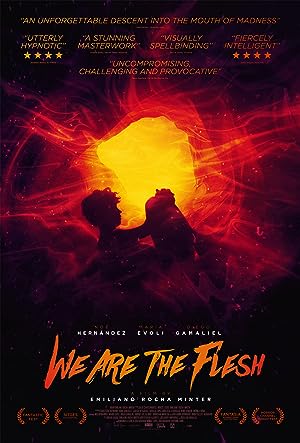 We Are the Flesh (2016)
79 min|Drama, Fantasy, Horror|20 Jan 2017
4.7Rating: 4.7 / 10 from 1,725 users
After wandering a ruined city for years in search of food and shelter, two siblings find their way into one of the last remaining buildings. Inside, they find a man who will make them a dangerous offer to survive the outside world.
Director: Emiliano Rocha Minter
Creator: Emiliano Rocha Minter
Actors: Noé Hernández, María Evoli, Diego Gamaliel, Gabino Rodríguez