The Adventures of Mickey Matson and the Copperhead Treasure 2015

When a mythical device from ancient times is rebuilt by a group of Confederates who feel the Civil War never ended, Mickey Matson and his newfound friend, Sully, must follow a series of clues left by his dead grandfather to keep the evil men away from the three mystical objects that power the device. If he fails, it could mean not only the loss of his family’s house, but maybe the demise of our country as we know it.

No doubt that producers saw a series of these Mickey Matson films and another was made and another may be planned if there’s public demand for same. But the McGuffin of this film, an alchemy machine is really a bit much. Only the littlest kids are going to swallow this one.

Young Derek Brandon is an appealing young title character who lives in a really rural part of Michigan and as it opens we discover he’s at the funeral of his grandfather Christopher Lloyd. Lloyd left him a rock which turns out to be the key to treasure. An unlimited treasure as it turns out because there was something to those medieval and ancient tales of alchemy where base matter can be turned into precious metal.

There’s also a secret society of people named after northern sympathizers to the Confederate cause, the Copperheads. They want that alchemy thing. Just think of the havoc it would reek on the economy of those damn Yankees.

Brandon as I said is appealing as is his female sidekick Francesca DeRosa who is visiting her grandmother Patrika Darbo. But the story was just way too outrageous. For the little kids only. 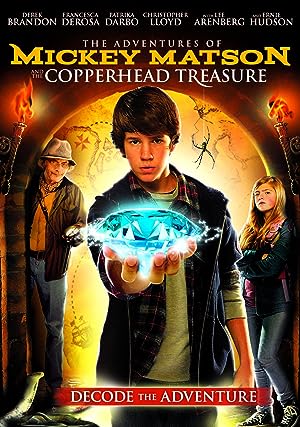 The Adventures of Mickey Matson and the Copperhead Treasure (2015)
94 min|Family, Mystery, Thriller|10 May 2015
5.1Rating: 5.1 / 10 from 585 users
When a mythical device from ancient times is rebuilt by a group of Confederates who feel the Civil War never ended, Mickey Matson and his newfound friend, Sully, must follow a series of …
Director: Harold Cronk
Creator: Harold Cronk
Actors: Derek Brandon, Francesca Derosa, Patrika Darbo, Christopher Lloyd